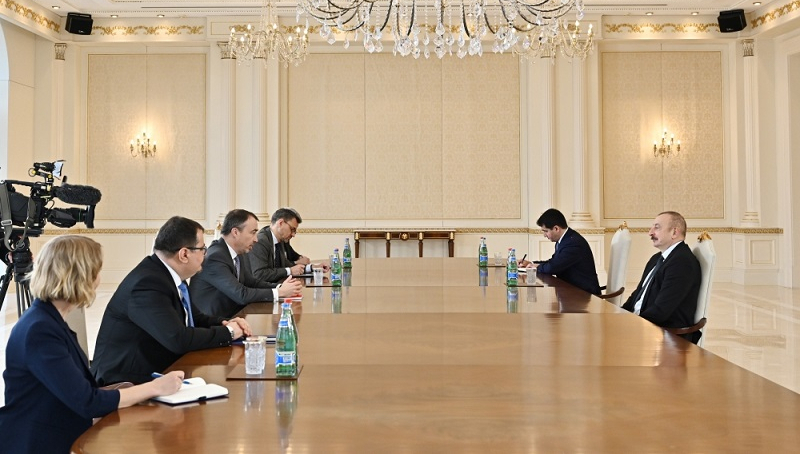 President of the Republic of Azerbaijan Ilham Aliyev has received a delegation led by European Union Special Representative for the South Caucasus and the crisis in Georgia Toivo Klaar, News.Az reports.

President Ilham Aliyev praised the participation of two EU commissioners in the meeting of the Southern Gas Corridor Advisory Council, describing it as evidence of the importance the EU attaches to relations with Azerbaijan. The head of state noted that Azerbaijan-EU relations were quite diversified and covered many areas. President Ilham Aliyev said that the allocation of a 2-billion-euro concessional credit line to Azerbaijan to support various projects, as stated by EU Commissioner for Neighborhood and Enlargement Oliver Varhelyi, was an indicator of the positive development of our relations.

The head of state stressed the importance of the meeting held at the initiative of President Charles Michel with the participation of the Armenian prime minister in Brussels in December last year. Emphasizing the importance of the Brussels agenda, President Ilham Aliyev highlighted the importance of discussions and tangible work on this issue, and praised the support for Azerbaijan in the demining process. The President noted that relevant agencies had been instructed to conduct negotiations on an agreement on cooperation between the European Union and Azerbaijan and complete it as soon as possible. Recalling that more than 4,000 people went missing during the first Armenia-Azerbaijan war, President Ilham Aliyev said it was important for the Armenian side to approach this issue in a constructive manner to determine the fate of missing persons and the mass graves where they are buried as agreed at the quadripartite meetings held at the initiative of French President Emmanuel Macron in Brussels last year and on 4 February 2022.

The sides also exchanged views on the restoration of communications, delimitation of borders and other key issues between Armenia and Azerbaijan.