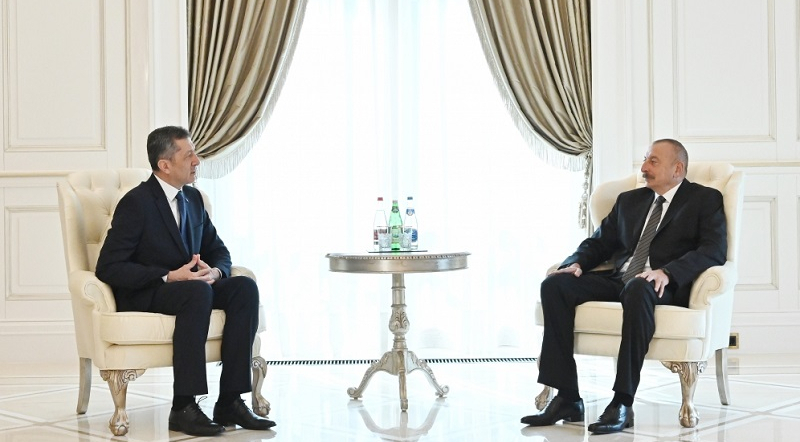 Welcoming the Turkish minister, President Aliyev noted that relations between the two countries are at the highest level.

The head of state said Azerbaijan and Turkey, as two brotherly countries, cooperate in all areas on the basis of mutual respect and mutual interests.

“Education is also an important part of our cooperation because in order to raise the young generation and stay connected to each other, of course, very important steps must be taken in this area. In fact, these steps are being taken. I am confident that during your current visit, many important issues will be discussed and specific plans for our future cooperation will be drawn up,” he said.

President Aliyev stressed that a new era has begun in Azerbaijan.

“After the second Karabakh war, a period of recovery and reconstruction began. I will also present you a book describing the destruction Armenia unleashed in the liberated lands. You will see the extent to which our lands have been devastated. A master plan for the cities is now being prepared and schools will be built as part of these master plans. The foundation of a school destroyed by the Armenians in Shusha was laid this month. The groundbreaking ceremony of the school, which is a gift offered by Turkey, will also be a part of the visit by my dear brother, President Recep Tayyip Erdogan,” he added.

The Turkish minister, in turn, said there can be no problem between the two countries in terms of educational programs, the development of education and the work to be done in the future.

“We will resolve them all. I do not go into the technical details of that with you. My colleague, my friend and I will do whatever is necessary in excess. Don't worry. Your orders are sufficient for us. In this context, the protocol we signed on professional activities is currently being implemented. We will continue discussions about that today. Our relations continue even at a higher level than official ones. We are doing everything together to speed up the process and work,” he said.