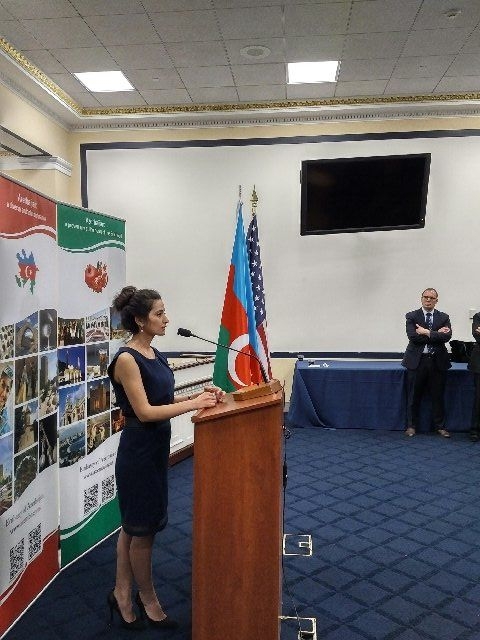 Azerbaijani Center of Midwest America organized a special event in the US Congress to pay tribute to victims of the Khojaly tragedy.

Azerbaijani embassy in the US told APA that the event on the 25th anniversary of the Khojaly massacre held as part of the "Justice for Khojaly" international awareness campaign, was attended by US congressmen, congressional staff, members of the diplomatic corps, representatives of the Azerbaijani and Turkish communities in the United States, as well as the local community.

Then, survivor of Khojaly tragedy Narmin Ibrahimova, who is studying in the US, shared her bitter memories about the bloody massacre occurred 25 yeas ago. She spoke about the sufferings underwent by hungry and thirsty Khojaly residents in forest at cold winter nights in order to escape the atrocities of the Armenian soldiers. The Azerbaijani survivor said that hundreds of civilians were brutally killed during the massacre and this incident left deep and unforgettable traces in the memories of minors like her.

Azerbaijani Ambassador to the US Elin Suleymanov said that the commemoration of this tragedy is a reminder of how important it is to restore the peace in the region. He said that the people of Azerbaijan rightfully call for justice for this tragedy, noting that despite all this suffering and injustice Azerbaijan is looking to the future.

Democratic Congressman Henry Cuellar (Texas), a member of the working group on Azerbaijan, stressed the strategic importance of US-Azerbaijan relations, noting that he is ready to provide support to strengthening the partnership between the two countries. Congressman Cuellar, who called himself a friend of Azerbaijan, said that he shares the grief of our people on this painful day and will continue to stand by Azerbaijan.

It’s now the second consecutive year that the Azerbaijani Center of Midwest America (ACMA) has organized a commemoration ceremony in the US Congress for the Khojaly massacre. As part of the campaign called “Justice for Khojaly,” a number of commemoration ceremonies have been held in Washington, New York City, Chicago, St. Louis, Boston, and Houston.