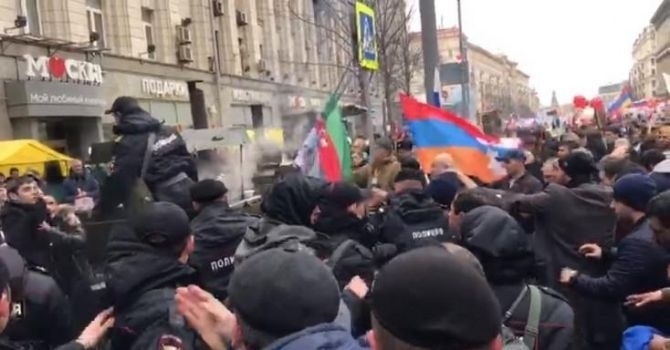 Azerbaijanis detained after the incident during a Immortal Regiment march, held in St. Petersburg on the occasion of Victory Day (May 9), have been released, Azerbaijan’s Consul General in St. Petersburg Sultan Gasimov told APA’s Russia bureau.

The Armenians resorted to provocation during the march, said the consul general. “They chanted different slogans, waving the flag of the separatist regime created in the occupied Azerbaijani territories. This was noticed by Azerbaijani young people. They asked OMON riot police to prevent the Armenians from waving the flag of the self-proclaimed “Nagorno-Karabakh Republic”. After being ignored by police, the Azerbaijanis grabbed the flags from the Armenians, as a result of which an incident occurred,” said Gasimov.

Ten Azerbaijanis were detained after the incident, said the consul general, adding. “Consulate officials dealt with the issue yesterday. The young people who’d been detained were released after our interference.”

Gasimov noted that the city leadership and other concerned bodies have been appealed to over the Armenian provocation.

During another Immortal Regiment march in Moscow, representatives of Armenian Diaspora carried the flag of so-called separatist regime and shouted “Artsakh”. Near the Belarusskaya subway station, a conflict occurred between Armenians and young activists of Azerbaijani Diaspora.

Azerbaijanis demanded Armenians to stop carrying the flag of the separatist regime. At this time, Armenians attacked Azerbaijanis and some of Azerbaijanis were injured. Police interfered in the incident.