The head of “CAN” and fashion designer Shervin Najafpour brought the realities of Karabakh to the attention of the local community in Norway.

During her appeal she condemned the Armenian aggression against Azerbaijan and informed the participants of the recent terror attacks of Armenian troops on Azerbaijani cities of Ganja, Barda, Tartar and other cities outside of the conflict areas.

As a cultural bridge builder with wide experience from many fields, she mentioned that it is crucial that the Norwegian media shall be more neutral and portray a fair image of the Karabakh conflict to the Norwegian citizens.

The media appears unfair and is portraying the Karabakh conflict unbalanced by claiming that Syrian fighters are fighting on Azerbaijan's side, when the truth is that Armenia is supported by terrorist organizations such as PKK, PJK, YPG fighting with it against Azerbaijan.

During the appeal slogans such as “Hear our voices Norwegian Media”, “Stop spreading fake news”, “Where is the Norwegian media” were shouted. Slogans such as “We want to go back home to Karabakh” and “Karabakh is Azerbaijan” was were also shouted.

Najafpour also underlined the fact that Azerbaijan has more than 1 million of internal displaced people and that the UN resolutions are not respected and violated.

Then the memory of the victims of terrorism was commemorated.

The Ambassador of Turkey to Norway Fazil Chorman and Charge d’affaires of the embassy also honoured the rally by showing their solidarity with the Norwegian Azerbaijani Turkish community.

During the peaceful demonstration, the head of the Turkish federation in Norway Hatice Luk and Turksih writer Sercan Leylek condemned Armenian terrorism, and said that the Turkish communities around the world are supporting their Azerbaijani brothers and sisters.

The UN youth delegate of Pakistani descent Neha Ikram focused on the UN resolutions that Armenia has not yet implemented, and informed the participants that by a simple online research she found out that Armenia has vandalized an Albanian church and turned a mosque into a barn of pigs and cows in Karabakh.

A 15-year-old young activist of Pakistani descent Arina Sheikh spoke about the children’s rights and that the war is depriving children of a happy future, calling the international community not to remain silent.

Young lawyer of Azerbaijani descent Vafa Bakkalar spoke about the occupying Armenian troops that shelled the city of Barda with cluster bombs against civilians, which was officially confirmed by international organizations such as Amnesty International and Human Rights Watch, as well as that Armenia has committed environmental terrorism using phosphorus weapons to burn Shusha forests.

Calling on the world community not to be indifferent to the killing of innocent children, the Azerbaijanis at the event displayed posters and placards with slogans such as "Karabakh is Azerbaijan!", "Stop Armenian terror!", "Respect the UN resolutions!", "We want to go back home to Karabakh!", "Norwegian government hear our voices!", "Armenia, out of Karabakh now!" and waved the flags of Azerbaijan and friendly countries on the square. 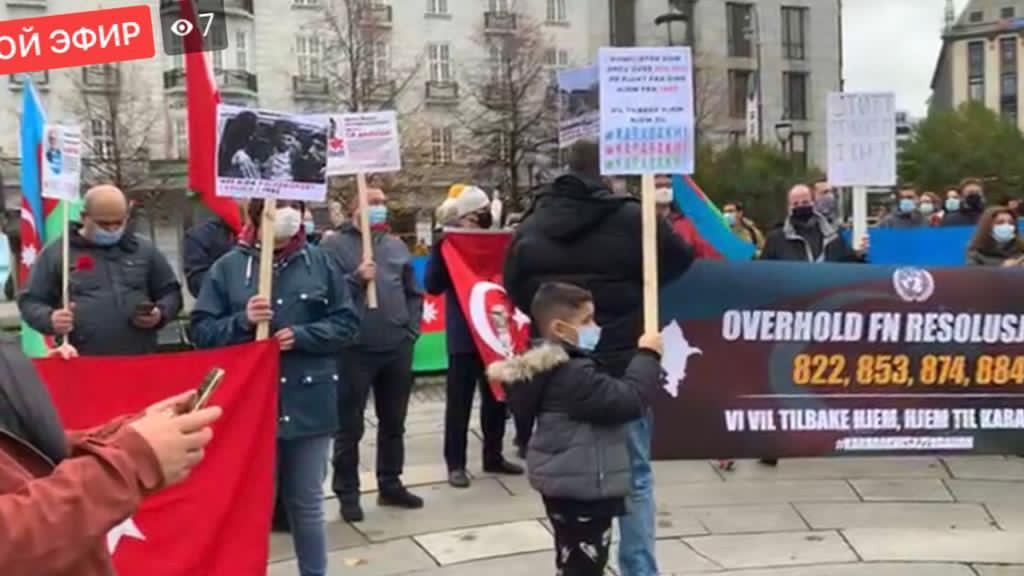