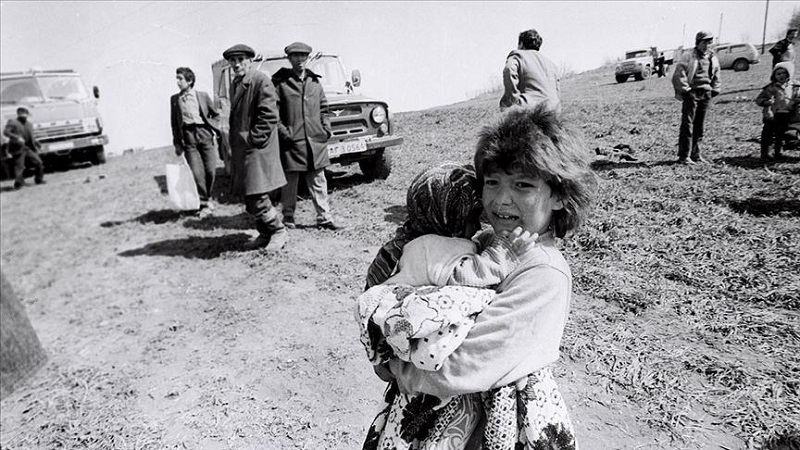 The Consulate General of Azerbaijan in Los Angeles has produced a short film dedicated to the Khojaly Genocide of 1992.

The film mentions that on February 26, 1992, Armenian troops attacked Azerbaijan’s town of Khojaly and brutally murdered 613 civilians, including children, women and the elderly, the Consulate General told News.Az.

The film presents a quote from Armenia’s ex-president Serzh Sargsyan, who was then in command of Armenian forces in Khojaly, and who bragged about teaching Azerbaijanis a lesson with this horrific genocidal massacre: “Before Khojaly, the Azerbaijanis thought that they were joking with us, they thought that the Armenians were people who could not raise their hand against the civilian population. We were able to break that [stereotype]. And that's what happened.”

The film also quotes the book authored by Markar Melkonian, the brother of the California-born Armenian terrorist Monte Melkonian, describing the cruelty of Armenian soldiers at Khojaly: "The fighters unsheathed the knives... and began stabbing… Monte crunched over the grass where women and girls lay scattered like broken dolls."

It is noted that the Human Rights Watch described Khojaly as "the largest massacre in the conflict" between Armenia and Azerbaijan.

The film highlights that in the early 1990s, Armenia invaded and ethnically cleansed 20 percent of Azerbaijan, forcibly displacing 800,000 Azerbaijanis from their ancestral lands. Stressing the fact that the UN Security Council condemned the invasion of Azerbaijan in 1993, the film shows the video of a UNSC statement read by Madeleine Albright, the then U.S. Ambassador to the U.N. In her capacity as the President of the Security Council, Albright demanded the “immediate, complete and unconditional withdrawal of occupying forces” from all occupied territories of Azerbaijan.

It is also mentioned that as of today 17 countries and over 20 U.S. States have condemned the Khojaly Genocide.

It states that in 2020, Azerbaijan liberated its lands from occupation and restored its territorial integrity. Similarly to Khojaly, during last fall’s war Armenia targeted civilians again, killing 100 Azerbaijani civilians, including 12 children, and wounding over 400.  It concludes by noting that the perpetrators of both the Khojaly Genocide and the latest war crimes are still at large.

The film has also been translated by Azerbaijan’s relevant Embassies into several languages, including Albanian, Chinese, Farsi, German, Greek, Spanish, Turkish and others.