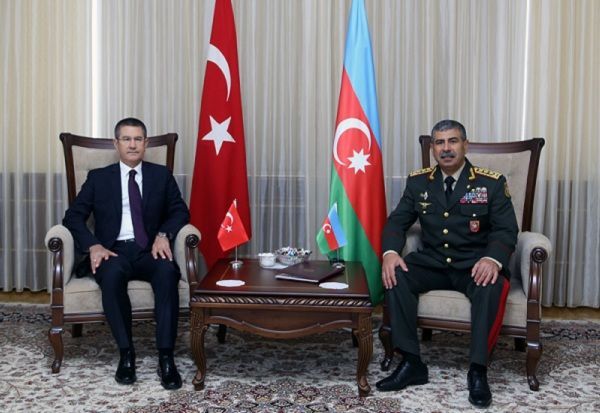 Prior to the meeting, the Turkish delegation visited the Alley of Honor and the Alley of Martyrs in Baku to lay wreath and flowers at the graves of national leader Heydar Aliyev, academician Zarifa Aliyeva and the heroics sons of Azerbaijan who sacrificed their lives for the country’s independence and territorial integrity. They also visited the Turkish Martyrs' Memorial (the monument erected in honor of Turkish soldiers killed in 1918).

Then an official welcoming ceremony for the Turkish delegation was held in the Ministry of Defense. The Turkish minister viewed the guard of honor and national anthems of both countries were played. A book of honor was signed in accordance with the protocol.

First, the defense ministers of Azerbaijan and Turkey held a one-on-one meeting, which was then continued in an expanded format.

Minister Hasanov said Azerbaijan and Turkey enjoy military cooperation both bilaterally and within the framework of NATO-led peacekeeping operations, adding that a strategic partnership built on friendly and fraternal relations is constantly developing.

Touching upon the military-political situation in the region, Hasanov underlined that the Armenia-Azerbaijan Nagorno-Karabakh conflict poses a serious threat to regional stability.

Emphasizing the importance of the joint military exercises conducted in recent years by Azerbaijan and Turkey, the minister underscored the need to increase the number of such drills in the future.

Speaking about his meeting with Azerbaijani President Ilham Aliyev, the Turkish minister, in turn, noted that ties between the two countries are based on friendship and historical roots.

Minister Canikli said that Turkey is an important partner of Azerbaijan.

The sides further exchanged views on the prospects for military ties, the development of cooperation in the military, military-technical spheres and in the field of military education and medicine, the expansion of activities within the framework of the High-level Military Dialogue, the development of joint plans, the organization of mutual visits of expert groups, as well as other issues of mutual interest.