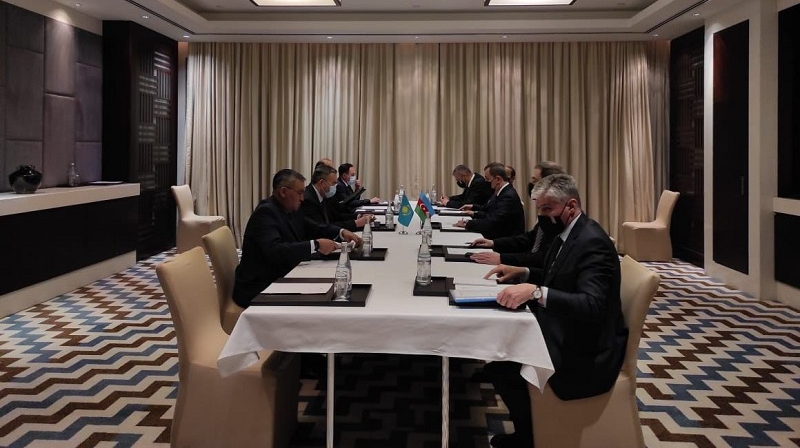 On the sidelines of the 9th ministerial conference “Heart of Asia - Istanbul Process” in Dushanbe, Azerbaijani Foreign Minister Jeyhun Bayramov held a meeting with his Kazakh counterpart Mukhtar Tleuberdi.

During the meeting, noting the high level of bilateral relations between the two countries, Minister Bayramov expressed that there are great opportunities for expanding this cooperation, the Foreign Ministry told News.Az.

The importance of holding a meeting of the Joint Intergovernmental Commission to further develop relations between the two countries was stressed.

Noting that Azerbaijan and Kazakhstan have established modern transport and transit infrastructures on their territories and this has already started yielding important results, Minister Jeyhun Bayramov mentioned that there are broad perspectives for the development of cooperation in this area.

Tileuberdi stressed that relations between the Presidents of the two countries are at a high level and this plays a significant role in the development of bilateral relations.

Touching upon the development of relations in the economic sphere, Minister Tileuberdi stressed that the Joint Intergovernmental Commission between Kazakhstan and Azerbaijan covers all areas of economic relations.

The Ministers exchanged views on holding of a number of events on the occasion of the 30th anniversary of the establishment of diplomatic relations between our countries next year.

During the meeting, Minister Bayramov informed his counterpart on the new situation in the region after the 44-day Patriotic War and the work done by the Azerbaijani side for the implementation of the trilateral statements.