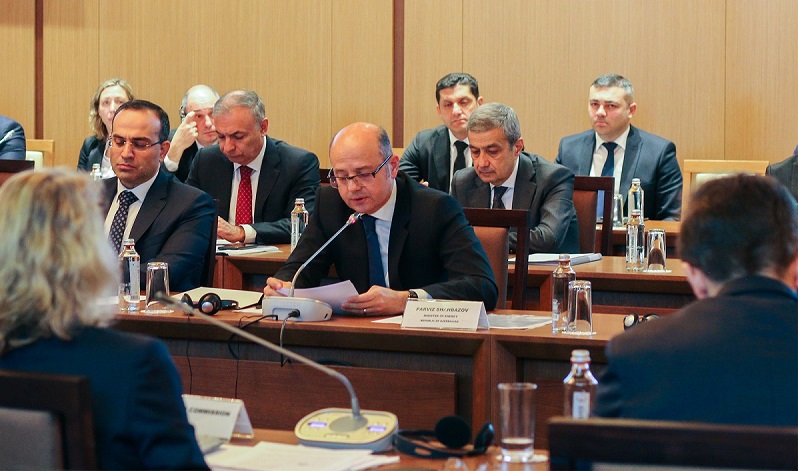 Azerbaijan’s gas exports to Europe will exceed 10 bcm by the end of 2022 if the current pace of daily exports sustains, said the country’s energy minister.

Parviz Shahbazov made the comments at the Ministerial round table on “Southeastern Energy Transition: Regional Cooperation for Energy Security, Diversification and Green Transition” held in Sofia, Bulgaria, the Ministry of Energy told News.Az.

The minister drew attention to the energy dialogue with the Union after the meeting between Azerbaijani President Ilham Aliyev and EU Commissioner for Energy Kadri Simson in February this year.

He noted that the main directions of Azerbaijan’s energy dialogue are decarbonization of the energy sector, energy transition, energy efficiency, expansion of the Southern Gas Corridor for additional gas, including hydrogen export to Europe, production and export of other types of "green energy".

Minister Shahbazov pointed to the importance of achieving a sustainable, affordable and safe energy supply and said that the solution to this problem is unrelated to giving preference in energy policies either to energy security, diversification, or green transition, but to keeping balance among all of them.

It was noted that the cleanest source of hydrocarbon, natural gas and renewable energy sources in the transition process will act not as reverse poles, but as an equal position energy resources that provide further diversification of energy supplies.

It was noted that the Southern Gas Corridor reaffirmed its strategic importance by providing European consumers with uninterrupted and affordable natural gas during the energy crisis. Azerbaijan is determined to continue its role as a reliable energy supplier for the region and Europe:

"So far, TAP has supplied 11.6 billion cubic meters (bcm) of gas to Europe.  Out of the 3.5 bcm exported from Azerbaijan to Europe in the first four months of 2022, 3.1 bcm supplied to Italy, 0.3 bcm to Greece, and 0.1 bcm to Bulgaria. If the current pace of daily exports sustains, our gas exports to Europe will exceed 10 bcm by the end of 2022," the minister added.