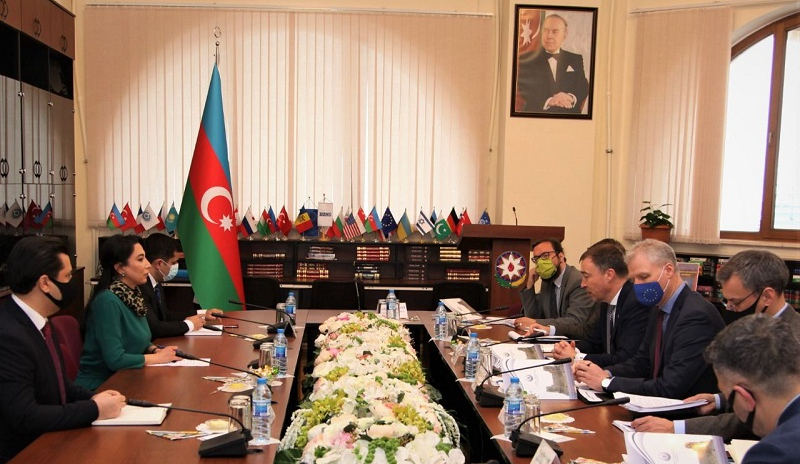 Azerbaijani Human Rights Commissioner (Ombudsperson) Sabina Aliyeva received a delegation led by EU Special Representative for the South Caucasus and the Crisis in Georgia Toivo Klaar, according to the Ombudsperson's Office.

The meeting was also attended by the head of the EU Delegation to Azerbaijan Kestutis Jankauskas.

The sides discussed the 44-day (from late Sept. through early Nov.2020) Second Karabakh War between Armenia and Azerbaijan, which ended in the liberation of Azerbaijani territories, which had been under Armenian occupation for about 30 years, as well as the situation with human rights in the post-war period.

Answers were given to different questions from the delegation members about the activities of the Ombudsperson for the protection of human rights during and after the war.

Aliyeva reminded the facts of gross violation of human rights by Armenia during the 44-day war, noting that in this regard, statements, appeals, open letters, and reports were sent to international organizations, including the EU.

She emphasized that banned weapons were used against the civilians of the Azerbaijani cities of Naftalan, Tartar, Ganja, and Barda during the war (resulting in death and injury of many civilians), spoke about the visits of missions to these cities to assess the facts, as well as reports drawn up on the basis of the collected proofs.

According to the Ombudsperson, Armenia hasn’t provided Azerbaijan with a map of minefields in the liberated territories, as a result of which cases of death and injury of civilians occur.

Aliyeva stressed that this also prevents the return of internally displaced persons to their native lands after the end of the war, and called on the EU to put pressure on Armenia in this matter.

Toivo Klaar highly appreciated the work of the institution of the Ombudsperson of Azerbaijan, noting his interest in further cooperation.