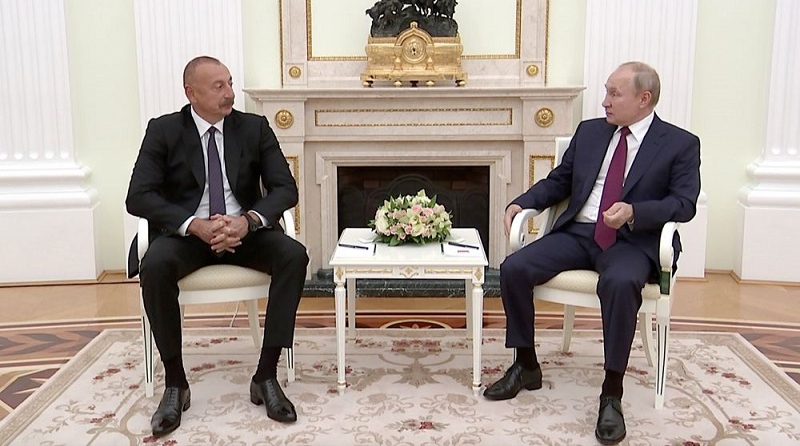 On July 20, President Ilham Aliyev of Azerbaijan paid a working visit to Moscow, upon the invitation of his Russian counterpart, Vladimir Putin (President.az, July 20). This was the second working visit of the Azerbaijani head of state to Russia this year, following his earlier trip to the Russian capital on January 11, together with Armenian Prime Minister Nikol Pashinian, who has also separately met with President Putin in Moscow in early July (see EDM, January 12; Kremlin.ru, July 7). The agenda of the meeting between the Azerbaijani and Russian presidents, as announced by the Kremlin prior to the visit, on July 19, focused primarily on “the practical aspects of the implementation of the November 9, 2020, and January 11, 2021, agreements of the leaders of Russia, Azerbaijan, and Armenia” (TASS, July 19).

The visit took place against the backdrop of the suspension of the trilateral (Armenia, Azerbaijan, Russia) negotiations over the reopening of regional transportation routes and escalating military tensions along the Armenian-Azerbaijani border as well as in the Karabakh region of Azerbaijan (see EDM, July 21). The uncertainty over the existing situation was exacerbated by recent claims in the Russian media about secret negotiations between Armenian and French officials to revise the trilateral ceasefire deal of November 9, 2020, France’s alleged attempt to push forward a new Karabakh resolution at the United Nations Security Council (UNSC), and the possible deployment of French peacekeepers to the Armenian-Azerbaijani border as well as to Karabakh (Moskovsky Komsomolets, Nezavisimaya Gazeta, July 17).

These Russian media reports do not seem plausible: any resolution at the UNSC could be swiftly vetoed by the Russian side, and the deployment of French peacekeepers to the region would hardly be possible without Moscow’s consent, according to Dr. Farid Shafiyev, the chairperson of the Baku-based Center of Analysis of International Relations (AIR Center) (Ednews.net, July 21). Nevertheless, the publication of such assertions by prominent Russian outlets can be interpreted as a sign of Russia’s displeasure toward the recent South Caucasus tour of European Union Council President Charles Michel, the mediating role he suggested the EU might play between Armenia and Azerbaijan in the peace process, and Yerevan’s embrace of the Western mediation offer (Armenpress.am, July 17).

These developments revealed some contrasting approaches concerning the Armenian-Azerbaijani peace process in the policies of the leading Western powers—the United States and EU (primarily France)—and Russia. As reaffirmed during President Michel’s regional visit, Brussels stresses the revival of the mission of the Minsk Group of the Organization for Security and Cooperation in Europe (OSCE), which would allow the US and France (as Minsk co-chairs, alongside Russia) to again play an influential role in the process along with, although probably not equal to, Russia (Consilium.europa.eu, July 17). Toward this end, the West is not rushing to recognize the conflict as resolved and emphasizes the importance of reaching an agreement about the status of the Armenians living in Karabakh. “The status of Nagorno-Karabakh must also be addressed,” President Michel stressed in his press conference with then-acting Prime Minister Pashinian, in Yerevan (Consilium.europa.eu, July 17).

In contrast, the Kremlin is primarily interested in the implementation of the trilateral agreements of November 9 and January 11 and has suggested postponing the issue of Karabakh’s status to the future. This was reiterated by Putin’s Press Secretary Dmitry Peskov, following the latest meeting between the Azerbaijani and Russian presidents. Commenting on the statements from EU members about their plans to join the post-war peace process between Armenia and Azerbaijan, Peskov stated that Moscow would welcome this role if it “facilitate[s] the implementation of the existing agreements”—which can be interpreted as Moscow’s rejection of any third-party attempts to modify the trilateral agreements (TASS, July 21).

The Moscow meeting of the Azerbaijani and Russian leaders on July 20 demonstrated the agreement between the two sides along these lines. President Putin thanked Aliyev for his constructive position in “one of the most important issues,” that is, “resolving the situation in the region” (Azertag, July 20). “I want to thank you for finding compromising solutions,” the Russian leader said. In his turn, President Aliyev expressed his gratitude to Putin for his attention to the peace process. “We are determined to ensure that the post-conflict period is as painless as possible. I think we succeed in this with our joint efforts,” Aliyev added (Azertag, July 20).

Azerbaijan has, on various occasions, officially declared the Karabakh conflict “resolved” and called upon the Armenian side to sign a peace agreement denouncing any claims to the other’s internationally recognized territories and putting a resolute end to hostilities (APA, June 25). As such, Baku also called upon Armenia to launch the demarcation and delimitation process of the state border through the mediation of international observers. Encouraging this approach, Russia’s Ministry of Foreign Affairs declared support to the demarcation of interstate borders between the two South Caucasus rivals, stressing that “the situation in separate parts of the Armenian-Azerbaijani border is not directly related to the Nagorno[-]Karabakh conflict settlement and is a result of the absence of legal formulation of the border” (Armenpress.am, July 9). For years, all the way up until the outbreak of last autumn’s 44-day Second Karabakh War, Baku had grown increasingly frustrated by the Minsk Group’s mediation failures as well as the biased approaches of Minsk co-chair France. Consequently, Azerbaijan has not declared any interest in seeing the Minsk Group take on any specific role in the post-war peace negotiations or in the border demarcation process with Armenia (Azertag, June 2).

The Moscow meeting between the Azerbaijani and Russian heads of state once again highlighted Moscow’s leading arbitration role between Baku and Yerevan, and it reaffirmed Azerbaijan and Russia’s support for the implementation of the post-war trilateral agreements. Nevertheless, along with some other issues, one major clause of the November 9 ceasefire accord, which envisages the withdrawal of Armenian armed forces from the Karabakh region in parallel with the deployment of Russia’s peacekeeping mission, remains to be fulfilled (see EDM, July 21). Although, during Aliyev’s July 20 visit to Russia, he and Putin made no public statements concerning this issue, Baku does expect Moscow to ensure the withdrawal of all Armenian military units from Azerbaijan’s sovereign territories. In the days following the Moscow meeting, a relative stability was recorded along the borderline between the armed forces of Armenia and Azerbaijan (Armenpress.am, July 22). But it remains to be seen if this stability is sustainable and can be followed by more comprehensive peacebuilding measures.

Vasif Huseynov is a senior fellow at the Baku-based Center of Analysis of International Relations (AIR Center).