Breaking through the wall of misunderstanding: Interview with the Ambassador of Azerbaijan to the Czech Republic 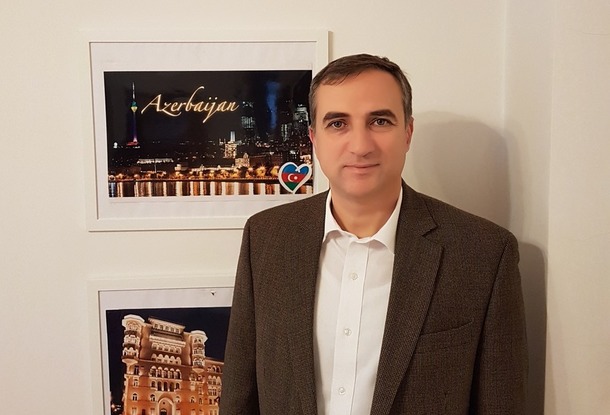 Ambassador of Azerbaijan Farid Shafiyev speaks about the undemocratic attitude of democratic media, Czech journalism and the Armenian lobby.

In the beginning of September, the investigation of the consortium of European newspapers called "Azerbaijan Laudromat" made a lot of noise. On the basis of the data from the Danish bank, it was stated that Baku sent about 2.5 million dollars to Europe through fake structures. Part of the money, according to the investigation, was used to buy real estate for members of the ruling elite, and the other part went to pro-Azerbaijani European politicians.

Approximately 130 million kroons came to the Czech Republic through these channels. Official Baku categorically rejects all the accusations and complains that none of the journalists are interested in its explanations. To correct the situation, portal 420on.cz talked directly with the ambassador of Azerbaijan to the Czech Republic Farid Shafiyev.

- Mr. Ambassador, why do you think this negativity arose around your country's representatives and their activities abroad?

- We all know that elections have just been held in the Czech Republic, there was a tense debate, and in this maelstrom Azerbaijan turned out to be somewhat of a bargaining chip or even an involuntary tool to discredit certain politicians. There were several materials that concerned our country. One of the articles spoke about the so-called "laundromat", however, I do not personally have any data confirming the authenticity of this information. And, as it turned out, the world mass media, replicating all this history, do not have any data on this issue too. They only have assumptions based on an investigation relating to the period of 2012-2014, which were presented as facts. To this I can answer - we do not deal with any illegal business in the Czech Republic. You can check it if you want. We act strictly within the framework of the convention on diplomatic relations.
Some journalists who wrote on this subject (for example, we still had a chance to talk with a reporter from Mlada Fronta), in principle, have almost no idea of what the diplomatic work consists of. There are deputies who form a group of friendship with our country, they actively participate in the development of bilateral relations between the Czech Republic and Azerbaijan. We are actively cooperating with them. And such friendship groups, of course, exist with other countries.

The article said that some money had been transferred from London to the Czech Republic though a representative of Transparency International said that they had no evidence that this was somehow connected with Czech politicians. Frankly, I already knew in April this year that a black PR campaign will be organized against some Czech politicians, including against the speaker of the parliament.

- That is, it is exclusively about the internal political struggle in the Czech Republic and some outside forces are not involved? The investigation has covered the whole of Europe ...

- I specify it, and I would like you to quote me correctly: there is the hand of the Armenian lobby. Although some of the readers probably will say: "Well, Azerbaijan is again trying to find a scapegoat." And again the Armenians. But, in fact, I spoke about this  to the Speaker of the Parliament and some MPs: I have precise information on this matter - there was an information leak. Moreover, there is a fact: a journalist who called  speaker Jan Gamaczek askled about the attitude towards Azerbaijan, and then suddenly asked about Turkey. In this case, it was not mentioned in any connection with the ‘laundromat’.

And in general it is not clear how it appeared in this context. And when Gamaczek asked how it is linked to Turkey, the journalist quickly retreated and took off the question. Conclusion: it's clear where the information comes from. The country that views Turkey and Azerbaijan as its enemies is Armenia. Therefore, I am sure that some of the materials were thrown off by the Armenian lobby, including, in order to discredit Czech politicians who participate in the group of friendship with Azerbaijan. I openly declare this. In the interview, I asked the Mlada Fronta reporter if there are any concrete proofs of the Landromat's scheme. But they didn’t have any, so the articles made a kind of a "disclaimer" about the unconfirmed information. As a result, Mlada Fronta apologized for the inaccurate information.

- Was the material edited after the official appeal of the embassy and your subsequent meeting with the reporter? At least in the online version?  After the fact check our editorial staff removed the entire material.

- The article was not deleted, but in the near future we are waiting for the release of my article with the relevant comments (the article was published on 01.11.17). And one more publication, absolutely slanderous, about Azerbaijani businessmen was promised to be amended and, we hope, they will bring official apologies. If this is not done, the Azerbaijani citizens mentioned in it are ready to sue and prove the falsity of the accusations. But for now we are waiting for the steps to be taken by the publication. Of course, it's sad that the topic of relations with a foreign state is used for internal political struggle, however, a similar situation develops in North America and Europe.

- However, these are not the first attacks on Azerbaijan by the European media. What is the reason for such a prejudiced attitude? The familiar theses about the dictatorial regime and Islam are supposed so far…

- Of course, it's fair to say that there were a lot of interesting articles on the economy of Azerbaijan, on bilateral relations, on the prospects of tourism - we are now actively developing this sector. But from the political point of view, you are right.

As in any other country, ours also has problems, including in the field of human rights, corruption and so on. We do not deny this, we are working on it. But for some reason no one talks about achieved success..

It is difficult to explain this, and we cannot reduce everything to the already mentioned "lobby". Probably, the role is played by the prejudiced attitude. Our progress and development of the economy, our own position on many issues of foreign policy, independence from international blocs and associations, we are not entering any "pro-Oriental" or "pro-Western" association-all this complicates our situation. Some forces want us to adhere to some "camps". But we prefer constructive relations with all our neighbors. This can be evidenced by the recent launch of an important railroad that is to connect China with Europe, it was created owing to the efforts of three countries: Georgia, Turkey and Azerbaijan. We are actively working on one more railway project between Russia and Iran.

As for the impression we are making. I will answer as a historian. The Western world traditionally perceives Islamic states through the prism of colonialism, seizure and at the same time uncivilization. In the historical science this phenomenon has received the term "orientalism". This has been going on since the confrontation between the Ottoman Empire and Europe. But those who seriously study the region know that Azerbaijan is a secular state, many religions coexist peacefully for many centuries including Jews, and Christians, and Muslims. And the legislation is built on European principles.

- What does the embassy do to improve the situation with public opinion?

- For some time we cooperated with PR agencies, and this is normal practice, but for some reason we were accused of "caviar diplomacy". Although we did the same as other countries to develop tourism, attract investment, establish bilateral ties. We worked on journalistic materials with various publications, and we hope to continue what was started. Now the flow of travelers to our country is increasing, and we try to talk about the culture, history, religion, architectural and natural beauties of the Azerbaijani land. We have a very tasty national cuisine, which is loved on the territory of the former USSR, but, unfortunately, almost nothing is known about it in the Czech Republic. We are a new country for Europe, and we need to further develop our "brand". Of course, such work requires time, effort and, openly speaking, finance.

We regularly send press releases to the press, but after that nobody contacts us. I presume that no one even reads them because of the stereotype. Journalists are accustomed to using secondary information from news agencies, and not directly. Probably, it is easier and faster, but quality suffers from this. We try to spread information through social networks.

- Do you think that the matter lies with in the unprofessional approach of individual publications and journalists?

- Before I arrived in the Czech Republic, I worked at the embassy in Canada. There, regardless of what material was published in the press on the theme of Azerbaijan, we had the opportunity to publish a response on a democratic basis. And we knew that the response would be published. In the Czech Republic the situation is different. Such attempts were unsuccessful, and we were told almost directly - either find s contact with definite journalists-editors, or just take the advertising space. This is the approach.

Of course, as I said, there are forces that deliberately inflame the situation. I want to list deputy Jaromir Stetina, who is sufficiently influential in certain circles and who allegedly was engaged in human rights activities, shared information with certain organizations like Člověk v tísni and seeks to undermine the territorial integrity of Azerbaijan. They have no other goals in relation to our country.

We know how many states were destroyed in the name of the "idea of democracy", and people after that did not live better, and chaos is recorded there. Of course, this in no way justifies the problems of overthrown governments, but what happened in the end?

We try to draw attention to our state not only as a promising economic region, but also through joint exhibitions, cooperation between universities, promoting the development of business ties. Students from Azerbaijan study in the Czech Republic.

- I just wanted to touch on the topic of the diaspora. How big is it in the Czech Republic? Azerbaijan is economically stable, there is no outflow of labor from the country - neither "hands" nor "brains". Students, having finished their studies, return to their homeland.

- We have a small diaspora here, especially if compared to other countries. According to statistics in the Czech Republic, there are about 700 of our citizens, of them about 200 are students. Nevertheless, in June, the Czech-Azerbaijani Chamber of Commerce was opened through the efforts of the Diaspora, which also plans to actively conduct and develop activities. In general, the plans for the next year are great – it will mark a century since the establishment of the Azerbaijan Democratic Republic, in fact, the celebration of the country's independence.

Yes, there is no big migration from the country. But we all the same look at these processes as a general trend of globalization, when people get used to working in other countries, to live and travel freely. The boundaries are open, there are many opportunities. For example, a lot of Czech specialists also work in Azerbaijan.

- The ambassador’s work means that you represent the face of the state. How does an individual feel about the Czech Republic? Do you allow yourself to have beer with dumplings in your free time?

- After all, I'm a patriot in the kitchen - nothing can rival Azeri dishes. But I like Czech beer! The country is very beautiful, there are so many UNESCO monuments. When there is time, I try to get acquainted with small towns, historical and architectural treasures of the Czech land, and its nature.