British ambassador: Azerbaijan’s toleranсe should be a model for other countries 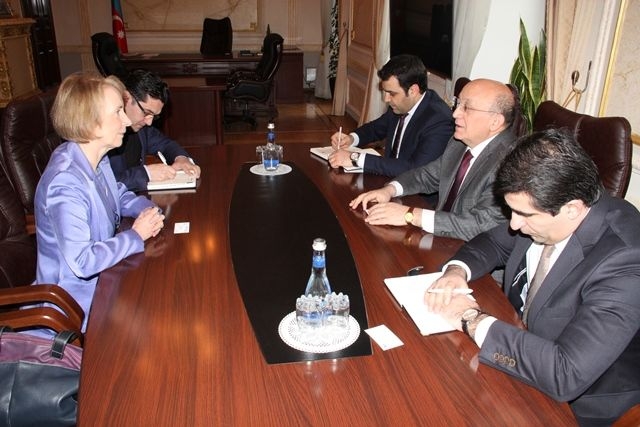 Chairman of the State Committee for Work with Religious Organizations Mubariz Gurbanli has received Dr. Carole Mary Crofts, Ambassador of the United Kingdom of Great Britain and Northern Ireland to Azerbaijan.

The sides held that Azerbaijan is a secular country where state-religion relationship is regulated by the Constitution and the law on religious freedom, the State Committee told APA.

“Mosques, synagogues and churches in the country are available for the people. Under no circumstances does the government interfere in the affairs of religion. However, the government has always paid attention and care to religion. Azerbaijani President Ilham Aliyev signed an order on the provision assistance to religious communities in the country. At the same time, our country is combating radicalism on economic, administrative and ideological levels and a lot has been achieved in this area,” he said.

According to him, congregational prayers performed by followers of various denominations altogether in the Heydar Mosque, which was built upon a direct instruction by the head of state, at a time the world is stricken by religious intolerance and discrimination, is an exemplary message to the Islamic world.

Dr. Carole Mary Crofts noted the promising cooperation environment between her country and Azerbaijan, adding that she would spare no efforts to help bilateral relations continue to develop. The diplomat said she has been to different parts of Azerbaijan since she came to the country, noting that she witnessed the multicultural and tolerant atmosphere in the country. She added that such an environment should be a good example for the rest of the world.