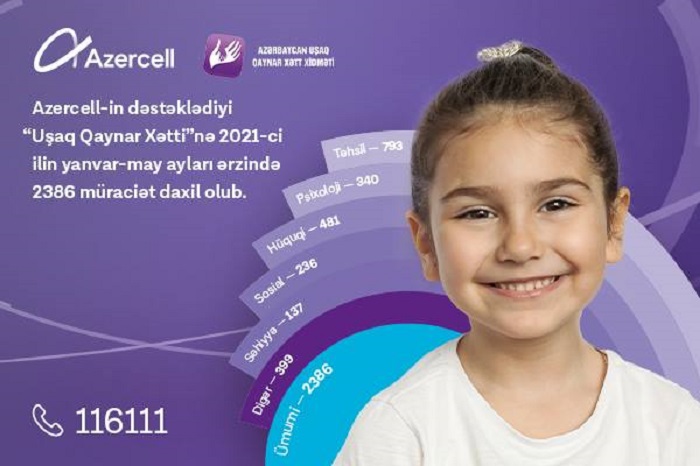 For the bright future of our country children must be provided with a healthy environment and carefree growth. Unfortunately, in every society there are children and adolescents who are oppressed, suppressed or face violations of their rights. The main purpose of the "Children Hotline" service, carried out jointly by Azercell, UNICEF Azerbaijan and  “Reliable Future” Social Initiatives Public Union, is to provide free assistance to children dealing with various difficulties. From the first day of its establishment, the employees of this service support children who have problems with their peers, need psychological and moral support, and help them to adapt to the social environment.

The service responded to 2,386 appeals in January-May this year. The majority of calls,  covering inquiries related to various areas, were related to education (793 appeals). In five-month period, the hotline experts received 481 appeals on legal procedures. The remaining calls were regarding psychological (340 appeals), social (236 appeals), health (137 appeals) and other (399) issues.

"Children Hotline" service receives calls not only from children, but also from their parents and relatives. Thus, in January-May of the current year, 1772 calls to the center were made by citizens over 18 and 506 calls by children and adolescents. Of those seeking help, 1,203 were female and 1,075 were male. There were also people who applied to the center anonymously via social networks. During the last 5 months, in connection with the appeals received via the hotline, meetings were organized with 34 families,  as well as 94 social and psychological rehabilitation cases have been addressed.

It should be noted that during the first 5 months of this year, the "Azerbaijan Children Hotline" service organized online webinars and live broadcasts. Live broadcast on "Psychological and physiological aspects of adolescence period", webinars for teenagers and young people called "Let's put an end to suicide!", "Feelings of loneliness" were met with interest by the social network users.

During this period, training sessions on "Clinical Interviews", as well as "Organization of social work and rehabilitation activities with children and families" have been organized for children and adolescents. A 10-day international training on combating child abuse was also held on the ZOOM platform with participation of the “Children Hotline”. During this period, awareness raising campaigns continued on social networks.