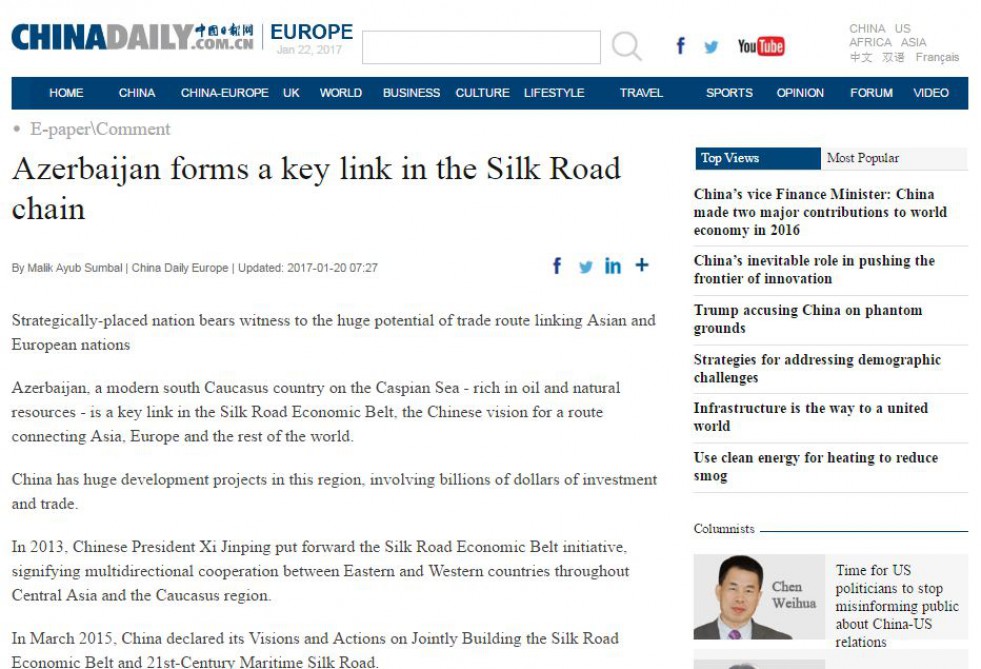 The article hails Azerbaijan`s geographical location: “Strategically-placed nation bears witness to the huge potential of trade route linking Asian and European nations. Azerbaijan, a modern south Caucasus country on the Caspian Sea - rich in oil and natural resources - is a key link in the Silk Road Economic Belt, the Chinese vision for a route connecting Asia, Europe and the rest of the world.”

Azerbaijan is the pivotal point of the China-Central Asia-West Asia Economic Corridor. The country has a long history of welcoming merchants from land and sea due to its proximity to Asia and Europe since the time of the ancient Silk Road. If we look back, the first merchant route between the Roman Empire and Western Han Dynasty (206 BC-AD 24) China emerged in the first century BC in Azerbaijan.”

“Traditionally, trade between China and West Asia takes place mostly via maritime routes, and the China-Central Asia-West Asia Economic Corridor is a land-based substitute for these traditional routes. The shortest way to approach West Asia from China is via Baku, the capital of Azerbaijan. Azerbaijan was the safest of the old routes in the 5th century BC. Barda (about 250 km west of Baku) was the old capital of Azerbaijan, a trading hub on the ancient Silk Road. China is the manufacturer of the world's fastest and most luxurious trains and a rail track is already operational from Aktau and Turkmenbashi, transporting goods to the New Baku International Sea Trade Port and then westward to Turkey and Europe.”

“China has been promoting the interconnection routes to the west of the Caspian Sea. Both China and Azerbaijan have strong links in the construction of railway tracks for transporting oil and gas. The Baku-Tbilisi-Ceyhan pipeline is a major initiative of Azerbaijan to supply oil and gas to Georgia and countries in Europe. The Baku-Tbilisi-Erzurum Pipeline is another project supplying oil and gas to satisfy the demands of Europe.

Azerbaijan has signed agreements for multiple trans-Caspian international transport routes with Kazakhstan and Georgia, and even initiated the Trans Caspian transport consortium to operate the Trans-Caspian International Transport Route from China to Europe.”

“Relations between China and Azerbaijan are growing fast and Azerbaijan has great potential to become a valuable partner in the Silk Road project - one of the great initiatives of the 21th century,” the article says.