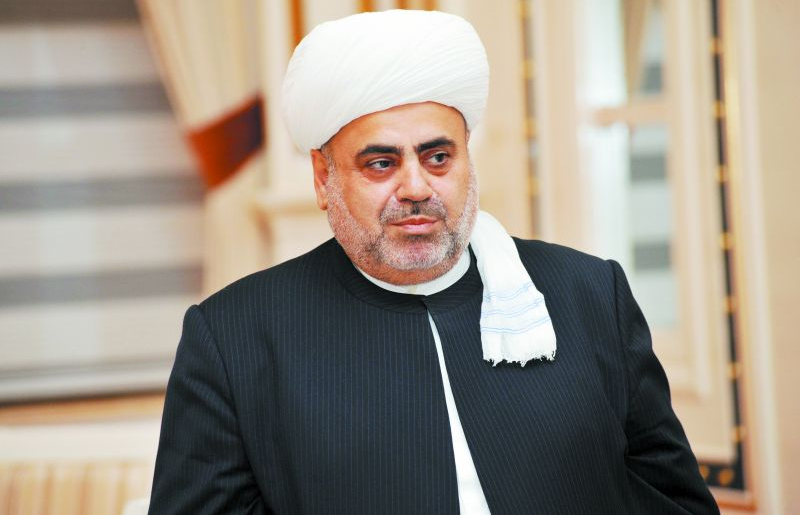 Chairman of the Caucasian Muslims Office, Sheikh-ul Islam Allahshukur Pashazade, has made a statement in connection with the visit of Garegin II to Khankendi.

The statement reads as follows:

"During the almost 30-year period of Armenia’s occupation of 20 percent of the territory of Azerbaijan and its failure to comply with the requirements of the UN Security Council resolutions, we always advocated a peaceful settlement of the conflict, supported the negotiating process at various levels, including the religious plane, did not call for hatred and did not make provocative statements on behalf of religion.

Thanks to the meetings of religious leaders on the peaceful settlement of the Armenia-Azerbaijan Nagorno-Karabakh conflict in Montreux, Rostov, Moscow, Tbilisi, Yerevan and Baku, held under the supreme patronage of the World Council of Churches, the Georgian Orthodox Church, the Vatican and especially the Russian Orthodox Church, we did not allow the issue to be moved into the religious plane.

However, to our great regret, the efforts towards a peaceful and fair settlement of the conflict were not supported by the Armenian Church.

Contrary to the interreligious dialogue calling for peace and the declarations signed by the current Armenian religious leaders, the Armenian Apostolic Church did not come up with ideas of peace that would provide salvation for the people, did not call for harmony, peaceful life, mutual understanding and cooperation.

Conversely, it morally justified the criminal actions of Armenian political leaders who did not comply with the resolutions of the UN Security Council and other international organizations, which demanded the liberation of the occupied territories of Azerbaijan.

A continuation of such activities, including the recent trip of the Catholicos of Armenia Garegin II to Khankendi, and the expression of revenge-seeking slogans by him are very regrettable. It should also be noted that the Armenian Church is spreading false information that allegedly Christian religious sites in tolerant and multicultural Azerbaijan are under threat, that obstacles are allegedly created for people to visit them and perform religious rites. This is being claimed despite the fact that there is not a single surviving and non-desecrated mosque and Islamic religious site in the territories liberated from occupation.

The belligerent rhetoric and conduct have not yet benefited anyone in history. The war brought grief to the Armenian people. Mothers cry for their sons who died and went missing as invaders in a foreign land. Calls for death, occupation, torture and violence instead of those for peace, good neighborliness and coexistence run counter to religious values. There is no doubt that such an approach does not serve a happy and prosperous life of peoples, especially the Armenian people, in the region. The mission of a religious figure is not to serve conflict and confrontation, but sacred ideas such as harmony and tranquility.

During the 44-day Patriotic War, the whole world saw the unity of the Azerbaijani people and the army, who were rallied around the Supreme Commander-in-Chief, their readiness to restore justice and the resolve to fight for the liberation of our land. At present, Azerbaijan, which has restored its internationally recognized territorial integrity, comes up with projects aimed at the economic development of the region, including Armenia, and improving the well-being of the Armenian people.

The only Creator for all calls on us religious leaders to continue efforts in the name of peace, tranquility and a just solution to the problems of our peoples. Avoiding hostilities is absolutely vital now. The path of peace and mutual understanding is not easy, as it requires the unification of peacekeeping efforts. It is necessary to strongly condemn the calls for war in such a fateful period. Peace and stability are essential for a happy and peaceful life, and therefore it is necessary to resolutely prevent unwanted interpretations of events in our region. The international community should not remain indifferent to this issue.

Addressing the international community and religious leaders, I urge them to express an attitude towards such actions of the Armenian Apostolic Church, support peace and progress in our region, not war. May the Almighty help establish peace and tranquility. Amen!"