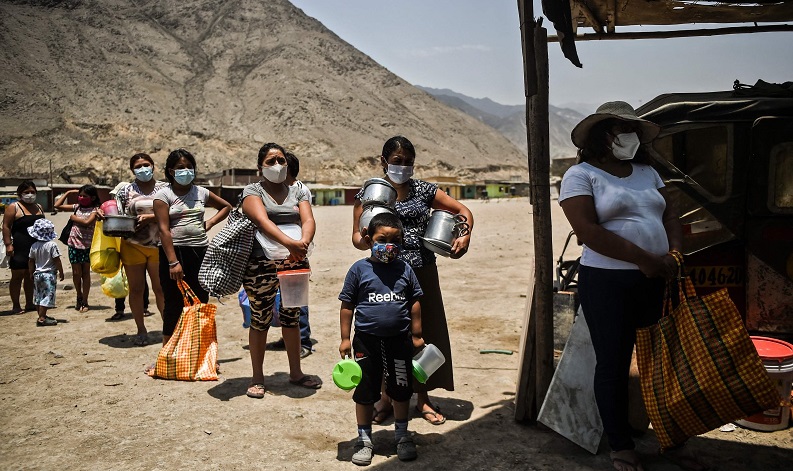 Extreme poverty across Latin America and the Caribbean has reached its worst level in two decades due to the coronavirus pandemic, a report by the U.N. said Thursday.

Poverty is also at its highest level in 12 years after the number of poor people in the region rose by 22 million in 2020 to 209 million.

The report presented online by agency director Alicia Barcena also found worsening rates of inequality and unemployment across a region that accounts for just 8.4% of the world's population but nearly 28% of global deaths from COVID-19, as The Associated Press (AP) reported.

The U.N.'s Economic Commission for Latin America and the Caribbean (ECLAC) said levels of inequality have reached "unsustainable" levels and it called for the creation of "a true welfare state, a task long postponed in the region."

Unemployment rose 2.6% points to 10.7 by the end of the year, with the greatest losses among women, informal workers, youths and migrants. More than 165 million students were affected by school closures, even if some – especially those with economic means – were able to turn to remote learning systems.

"The indices of inequality in the region worsened along with employment and labor participation rates, among women above all, due to the COVID-19 pandemic and despite the emergency social protection measures that countries have adopted to halt this phenomenon," said ECLAC.

ECLAC's report indicated that the rate of job market participation by women was at 46% in 2020, while for men it was 69%. Additional estimates put the female unemployment rate at 12%.

"The women of the region are a crucial part of the frontline response to the pandemic. Some 73.2% of people employed in the health sector are women, who have had to face extreme working conditions such as long work days, in addition to increased risk of contagion as health personnel. All of this in a regional context in which salary discrimination persists, where salaries for women who work in the health sector are 23.7% less than men’s in the same sector," Barcena highlighted.

The report said the situation would have been worse without household subsidy programs enacted by many governments to cushion the blow for some 84 million households. The body predicts that the region of around 650 million people will experience a 7.7% drop in the gross domestic product (GDP) in 2020.

"It is estimated that in 2020 the extreme poverty rate was 12.5% while the poverty rate affected 33.7% of the population," ECLAC said. The report added that poverty is greater in rural areas, among children and adolescents, indigenous and Afro-descendent people, and in the population with lower education levels.

"There is no doubt that the costs of inequality have become unsustainable and that it is necessary to build back with equality and sustainability, aiming to create a true welfare state, a task long postponed in the region," Barcena said, according to remarks carried by Agence France-Presse (AFP).

The report said the coronavirus pandemic had mostly affected lower- and lower-middle income families. Latin America and the Caribbean have suffered 20 million coronavirus cases and 635,000 deaths.

"The pandemic has exposed and exacerbated the region's major structural gaps and currently, we are living in a time of heightened uncertainty in which neither the way out of the crisis nor the speed of that process is yet known," said Barcena in presenting the body's report in Chile. She also noted "great inequality in access to vaccines" needed to escape from the problem.