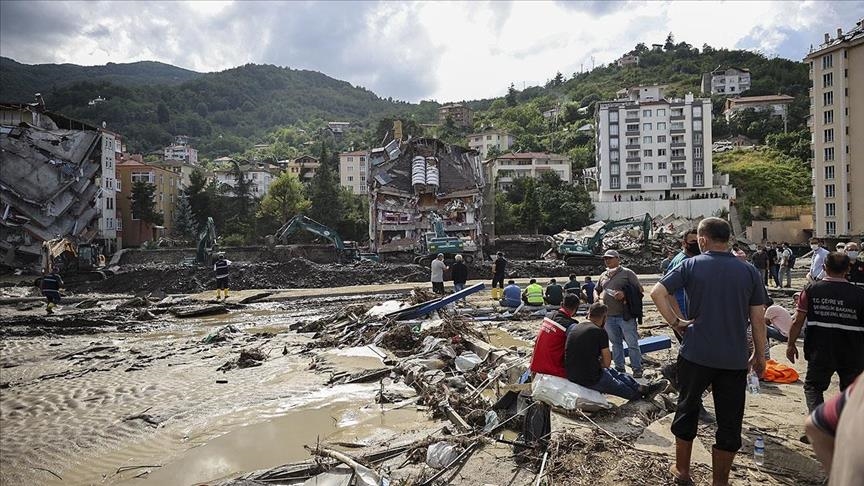 Floods caused by heavy rains hit the Black Sea region in the north of the country on Wednesday, leaving 34 people dead in the province of Kastamonu, a Disaster and Emergency Management Authority (AFAD) statement said.

Six others died in the Sinop province, while search efforts are ongoing for one individual in the Bartin province.

Rescue and relief operations continue in the flood-hit areas, the statement added.

Nearly 950 workers in Bartin, 2,807 in Kastamonu, and 1,693 in Sinop are conducting relief work in the affected areas, according to an AFAD statement.

A total of 341 people in Bartin, 1,380 in Kastamonu, and 526 in Sinop were evacuated to safe areas by helicopters and boats, the statement added.

Meanwhile, 223 volunteers, nine catering trucks, and 54 vehicles sent by the Turkish Red Crescent to the region are working on the ground.

"We will do our best as a state as quickly as possible, and hopefully we will rise from our ashes again," he said.

The president added that he would make an on-the-spot assessment together with Interior Minister Suleyman Soylu, Transport and Infrastructure Minister Adil Karaismailoglu, and Environment and Urbanization Minister Murat Kurum. The necessary steps will be taken after the assessment, he said.

Later in the day, Erdogan announced that the places affected had been declared a disaster area.

These places will be able to defer tax dues and local tradespeople will be allowed to postpone payments to the country's Social Security Institution. Assistance will also be provided to cover property, vehicle, and workplace losses.

Businesses' loan repayments will also be postponed, with the state to prepare an emergency support plan for disaster-hit areas.