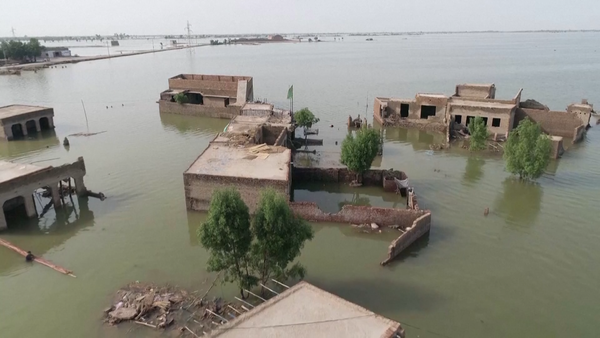 With 57 more deaths over the past 24 hours, the death toll from the raging floods in Pakistan has reached 1,265, the country's national disaster agency said on Saturday, News.Az reports citing Anadolu Agency.

Of the latest fatalities, most of the deaths, 38, have been reported from the southern province of Sindh, where a fresh spell of floods has inundated more land in the central districts over the past 48 hours, pushing the overall tally in the province to 502 since mid-June.

Another 17 people were killed in separate flood-related mishaps in the northwestern Khyber Pakhtunkhwa province, which has also been hit hard by the swirling floods caused by torrential rains.

Since June 14, a total of 285 people have died in Khyber Pakhtunkhwa, followed by 257 fatalities in the southwestern Balochistan province, according to the National Disaster Management Authority (NDMA).

Some 188 people have died in the northeastern Punjab province, the authority said.

Many people who are already marooned are now bracing for the peak of high flood at the Kotri barrage, located some 150 kilometers (about 93 miles) from Karachi on Saturday before the flow is released for the Indus Delta downstream.

Footage aired on local broadcaster Geo News showed hundreds of desperate people, including in the towns of Khairpur Nathan Shah, Johi, and Shadadkot in central Sindh, placing sand and sand-packed bags in an attempt to consolidate embankments against the gushing floodwaters.

Floods caused by unprecedented rains have inundated a third of the country, prompting the government to issue an international appeal.

Pakistan has already received 12 planes from Türkiye, one of which has just landed at Karachi airport, carrying tents, rations, medicine, kitchen items, baby food, and other relief supplies.

Türkiye, which sent a ministerial delegation to Islamabad on Friday to express its solidarity with Pakistan, also delivered two trains full of relief supplies to the flood-ravaged country. The country will send another train from Istanbul in the coming days.

Constant rains and raging floods have already destroyed a large chunk of the country's infrastructure and agricultural lands, including tens of thousands of houses, roads, and bridges, as well as washing away over a million animals.

Almost 45% of the country's cropland has already been inundated by the floods, posing a serious threat to food security and further adding to the already skyrocketing inflation.