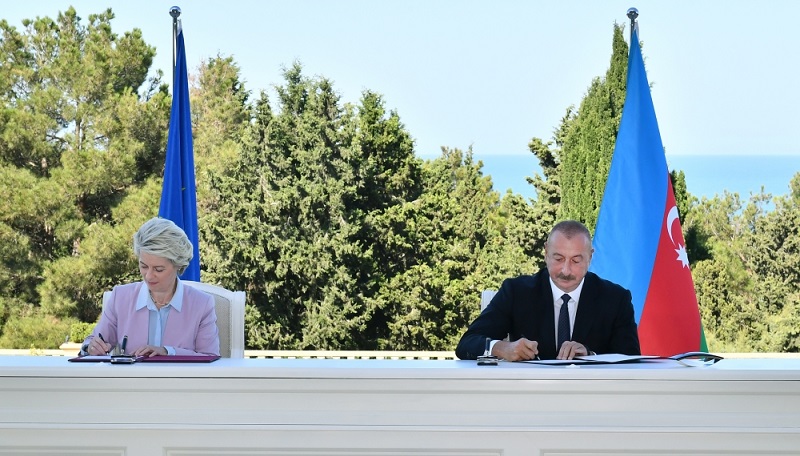 On July 18, Azerbaijan and the EU signed a new Memorandum of Understanding on Strategic Partnership in the field of energy, News.Az reports.

The document says that the Sides concur that strategic energy relations and cooperation between the European Union and Azerbaijan are a key factor contributing to open, competitive, diversified and secure energy markets. The Sides also recall the objectives defined under the Paris Agreement that has been ratified by the Sides and, consequently, intend to pursue efforts to limit the temperature increase to 1.5 °C by reducing their respective greenhouse gas emissions. The Sides aim to cooperate towards meeting the objectives of the Agreement and ensuring its full implementation, including via regular NDCs updates aiming at rapid, deep and sustained reductions in greenhouse gas emissions by 2030 and designing Long Term Low Emission Development Strategies aligned with the aims of achieving net zero emissions by 2050.

The European Union acknowledges that natural gas will continue to play an important role in terms of energy consumption and electricity generation in the European Union until 2030. Going forward natural gas will continue to be used in the European Union while being progressively replaced in line with its climate neutrality commitment by 2050. The Sides also acknowledge the importance of the Global Methane Pledge that requires its signatories to reduce methane emissions collectively by at least 30% by 2030; and to take necessary steps to reduce methane emissions across supply chains. Since Azerbaijan produces fossil natural gas, and the European Union imports it, the Sides recognise that the collective responsibility is to make this supply chain as efficient, environment and climate friendly as possible. The Sides acknowledge the importance of green electricity in fighting global warming and mitigating climate change and its potential for increasing the security and resilience of the energy systems, and consider that there is an important cooperation potential in the renewable and energy efficiency areas including electricity exchanges.

The Sides recall the importance of recent declarations, initiatives and agreements in implementing the cooperation of the Sides in the field of energy, in particular:

The Memorandum of Understanding on a Strategic Partnership in the Field of Energy signed in 2006 by the European Union and the Republic of Azerbaijan;

The Joint Declaration on the Southern Gas Corridor signed on 13 January 2011 by the European Commission and Azerbaijan;

The REPowerEU plan, which recognises that the expansion of the Southern Gas Corridor will play a major role to secure gas supply for South Eastern Europe;

The Sides also emphasise their commitment to the respect for and support to the territorial integrity, inviolability of international borders, independence, sovereignty of each other, including all EU Member States, as well as to the principle of good neighbourly relations.