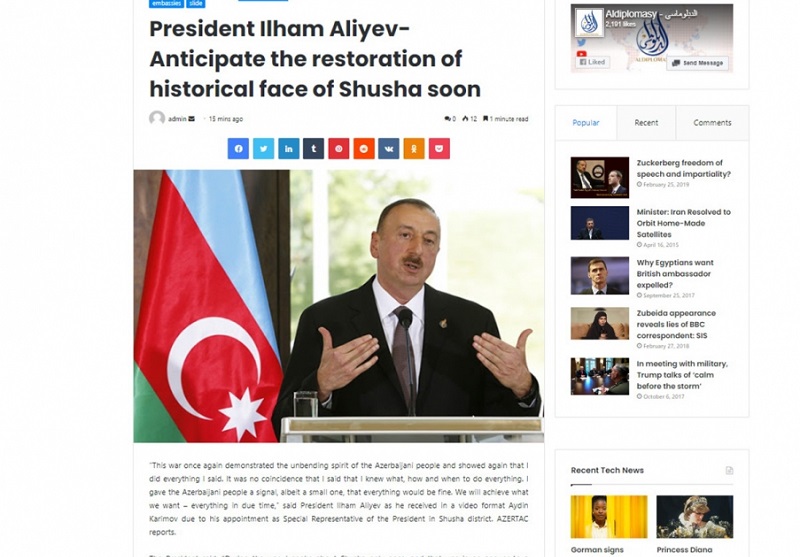 “This war once again demonstrated the unbending spirit of the Azerbaijani people and showed again that I did everything I said. It was no coincidence that I said that I knew what, how and when to do everything. I gave the Azerbaijani people a signal, albeit a small one, that everything would be fine. We will achieve what we want – everything in due time,” says the article quoting President Ilham Aliyev as he received in a video format Aydin Karimov due to his appointment as Special Representative of the President in Shusha district.

“During the war, I spoke about Shusha only once, and that was in an answer to a correspondent’s question as to when Shusha would be taken. Of course, we could not talk about it. I said that our victory would be incomplete without Shusha, but I had no doubts that we would free our dear and native Shusha from Armenian occupation and raise the flag of Azerbaijan there. At that time, I said that the flag of Azerbaijan would be raised in Shusha. And today I say that all of us, all the people will revive Shusha!” President Ilham Aliyev said.

“I want to say again that you have a huge responsibility. I am sure that you will realize this responsibility and play an active role in the revival of Shusha. You probably also know and have no doubt that the restoration of Shusha will always be in my spotlight, and Shusha will restore its historical appearance in the near future,” the head of state added.