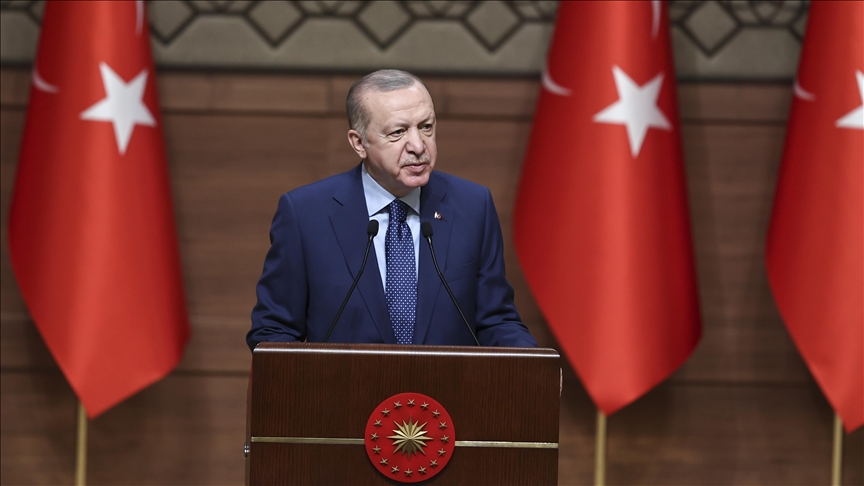 The Turkish leader on Thursday called for unity among citizens, saying that the national anthem explains why they should protect the homeland and strengthen the state, Anadolu Agency reports.

The Turkish national anthem was written in 1921 during the War of Independence as Turkey battled occupation by foreign forces after World War I.

"If we [Turkey] display the slightest laxity in this struggle [against terrorism], they will stand up before us with impositions worse than the Treaty of Sevres," President Recep Tayyip Erdogan said at a ceremony to confer the state medal at the presidential complex.

Erdogan said the country faced many attempts to "bring the nation to its knees" through terrorism or a coup bid but vowed that such "dirty ambitions" will not be achieved in the future, either.

The Treaty of Serves, which was an unfair pact imposed on the Ottoman Empire in 1920 after World War I, was replaced by the Treaty of Lausanne -- signed in 1923 by Turkey on one side and Britain, France, Italy, Greece, and their allies on the other -- recognizing the modern Turkish state.

Mentioning the collapses of Seljuk and Ottoman empires due to disunity within, Erdogan pledged that Turkey would not face the same fate.

On the 106th anniversary of the 1915 Battle of Canakkale, also known as Gallipoli, the president said Turkey had saved its independence and future despite the losses.

"Every martyr, every veteran we had lost are the symbolic seal of our independence and future," Erdogan added.

Tens of thousands of soldiers died in one of the world's most ferocious battles – the Gallipoli campaign in the Ottoman Empire during World War I.

The events leading up to the momentous battle started in February 1915, when Britain and France decided to launch the Gallipoli campaign to knock the Ottoman Empire out of the war as quickly as possible by reaching and capturing its capital, Istanbul.

They started their attack on March 18 -- the day commemorated as Canakkale Naval Victory Day -- but the waters were filled with a network of mines laid by Ottoman vessels.

On April 25, Allied soldiers landed on the shores of the Gallipoli peninsula. The troops were there as part of a plan to open the Dardanelles Strait on Turkey's Aegean coast to Allied fleets, allowing them to threaten the Ottoman capital.

The Allied Forces, however, encountered strong and courageous resistance from the Turks and the campaign turned out to be a costly failure. Tens of thousands of Turkish nationals and soldiers died, along with tens of thousands of Europeans, plus around 7,000-8,000 Australians and nearly 3,000 New Zealanders.

Victory against the Allied forces boosted the morale of the Turkish side, which then went on to wage a war of independence between 1919-1922, and eventually formed a republic in 1923 from the ashes of the old empire.