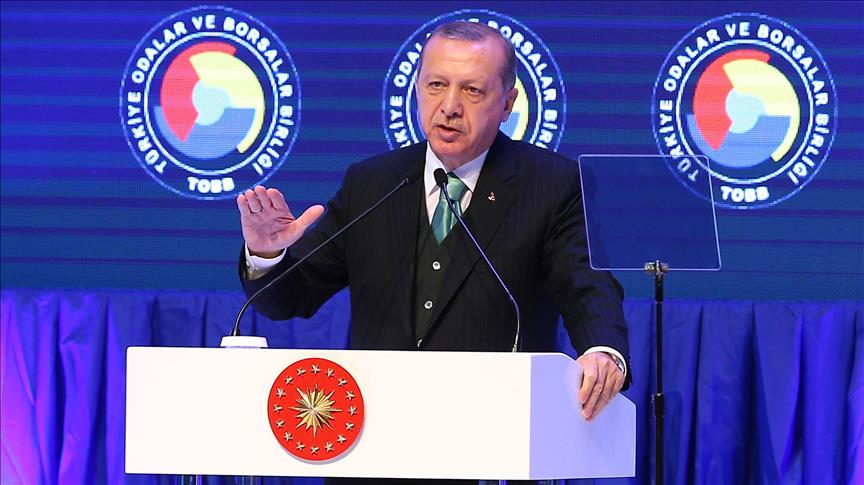 "There are complaints about high interest rates everywhere. As president I always kept it on my list,” Recep Tayyip Erdogan told a meeting of the Turkish Union of Chambers and Commodity Exchanges (TOBB) in the capital Ankara, according to Anadolu Agency.

“Because I see high interest as a tool of exploitation. It’s not a mentality for profit but exploitation," he added.

Erdogan has been outspoken in advocating that lenders and Turkey’s Central Bank bring down interest rates.

Erdogan said that they continue to stand by everyone whose only aim is to produce and develop the country.

"We provide all kinds of support to those who are keen to work, produce, and earn rather than standing in their way. We always consult with representatives of the Turkish business environment in all this work," he added.

Separately Erdogan predicted that by the year 2035, Turkey's population will exceed 90 million, putting it into the upper echelons of countries by population, and that it will maintain its power.

"The most important thing is we will utilize this population in the most effective way by joining the world's top 10 economies," he said, adding that they are determined that Turkey's young, educated, and dynamic population will be the engine of the country's economic growth.

Erdogan said that by 2035 Turkey will take its place among the world’s most prosperous countries after per capita income rises above $25,000, and wealth will spread across Turkey, reducing income inequality.

He added that this will bring solidarity to the country.

In addition Erdogan stressed that they should make Turkey a global hub for information technology, energy, transportation, logistics, and trade by combining economic breakthroughs with new investment opportunities.

"Let's make a 100 percent Turkish-made car within the TOBB community," he said, adding that Turkey has the people and parts necessary to produce such a car.