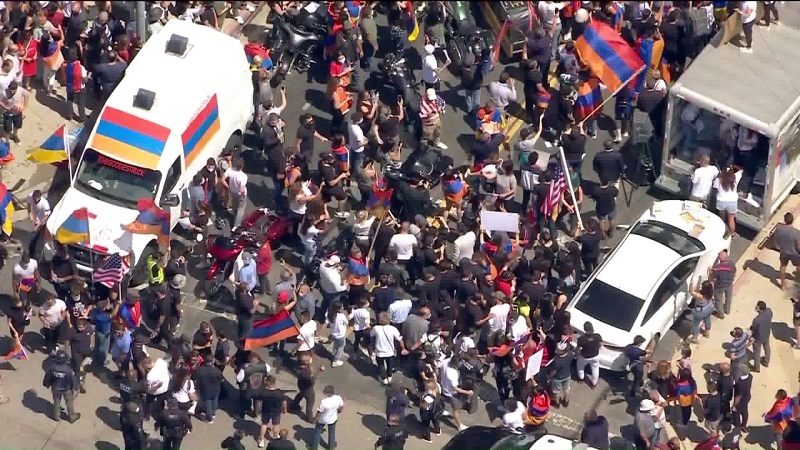 News.Az presents the article by Tarlan Ahmadov, the founder and President of the Board of Azerbaijan Society of Maine.

Being a resident of Maine for almost two decades – a state which is considered by many to be the safest in the entire nation – has made my family and other community members feel protected and happy. We consider Maine to be a place where we can put down our roots. But recently this image of safety and happiness was shattered by an outbreak of ethnic violence during a July 21 protest against the Azerbaijan Consulate General in Los Angeles.

On that day, approximately 3,000 Armenian protesters attacked and assaulted a small group (around 30) of Azerbaijanis, causing damages that required urgent medical attention at the local hospital in L.A. In addition, according to the LA Times, a Los Angeles Police Department (LAPD) officer was hurt during the protest. With a push from the Azerbaijani community, and friends of the community, the LAPD opened a hate-crime investigation. In addition, the U.S. Embassies in Armenia and Azerbaijan, as well as several Jewish groups, including the American Jewish Committee, and the Simon Wiesenthal Center, issued statements condemning the violence.

Street demonstrations across the U.S. and elsewhere around the world by Armenians and Azerbaijanis have followed a July 12 attack by the Armenian Armed Forces, which launched a military assault across the border with Azerbaijan. The assault has escalated into intense fighting, which in turn has resulted in military and civilian casualties, and threatened Azerbaijan’s oil and gas pipeline infrastructure, a vital source for Europe’s energy security. This latest outbreak is another reminder that the frozen thirty-year Armenia-Azerbaijan conflict remains a major threat to peace and stability in the Caucasus and the entire region of Eurasia. Armenia continues to occupy 20 percent of Azerbaijan’s internationally recognized territories in violation of four U.N. Security Council resolutions and other international agreements.

My family’s and my community’s hearts and minds are occupied by terror due to images and videos of the violence that erupted at a peaceful protest in Los Angeles. YouTube footage shows radical Armenians chanting aggressive slogans full of racist, ethnic-based hate, driving cars in front of protestors, spitting insults, injuring protestors, and burning Azerbaijani flags. For me, California has always been associated with diversity – a welcoming place for people from many cultures. I would never have imagined that one day I would see such ethnically induced violence in broad daylight in California, coupled with the LAPD’s failure to adequately protect peaceful protestors.

Armenian radicals are calling for an intimidation campaign against Azerbaijanis in the United States. Outrageous social media posts by Armenians have threatened the Azerbaijani community in California, offering bounties for those who locate Azerbaijanis.

Our families are frightened and scared to go out in public or be identified as Azerbaijanis. We cannot sleep. We cannot eat. Our kids are upset and traumatized. We can’t believe that as citizens of a free democratic society, we are being targeted because of our national origin! We need the full support of our government, our elected bodies, and our communities! In our latest communications with members of the Azerbaijani Community of California, we found that individuals and families are relocating due to the threats they have received.

I believe that the majority of Armenian-Americans are shocked by these hate crimes and hope that the Armenian-American Community will join others in condemning these violent acts, as well as the online threats against Azerbaijanis.

In recent months, America has experienced a very traumatic soul-searching about race, discrimination, and equality. Racial injustice, discrimination based on religious affiliation, biases against minorities all have real-life consequences for real people. Hate crimes affect not just the victims of violence. Hate crimes and violence have much wider implications for society as a whole.