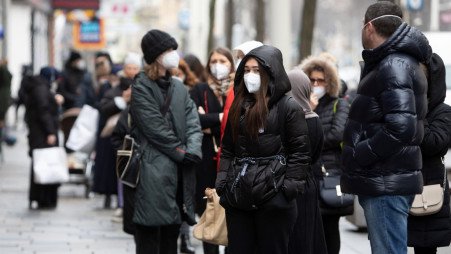 Coronavirus infections broke records on Wednesday in parts of Europe, once again the epicentre of a pandemic which has prompted new curbs on movement and made health experts think again about booster vaccination shots, News.Az reports citing Reuters.

Slovakia, the Czech Republic and Hungary all reported new highs in daily infections as winter grips the continent and people gather indoors in the run-up to Christmas, providing a perfect breeding ground for COVID-19.

The disease has swept the world in the two years since it was first identified in central China, infecting more than 258 million people and killing 5.4 million.

The European Centre for Disease Prevention and Control (ECDC), the EU public health agency, recommended vaccine boosters for all adults, with priority for those over 40, in a major shift of policy.

"Available evidence emerging from Israel and the UK shows a significant increase in protection against infection and severe disease following a booster dose in all age groups in the short term," the ECDC said in a report published on Wednesday.

Many EU countries have already begun giving booster doses to their populations but are using different criteria to make priorities and different intervals between the first shots and boosters.

ECDC head Andrea Ammon said boosters would increase protection against infection caused by waning immunity and "could potentially reduce the transmission in the population and prevent additional hospitalisations and deaths".

She advised countries with low levels of vaccination to speed up their rollouts and warned of high risks of a further spike in deaths and hospitalisations in Europe in December and January if the recommended measures are not introduced.

Sweden will begin gradually rolling out boosters to all adults, government and health officials said. Booster shots of mRNA vaccine have been offered to people aged 65 or above, with an eye to eventually extending the shots to other groups.

"We are faced with an uncertain winter," Health Minister Lena Hallengren told a news conference. "You can contribute by staying home if you're sick or by getting vaccinated if you haven't already, and taking your booster when you're offered it."

Unlike many of its neighbours, Sweden has not been hit by a new wave of infections, and hospitalisations remain relatively low, but there have been scattered signs the pandemic is picking up pace.

Slovakia reported its highest daily rise in cases on Wednesday, just ahead of a government meeting likely to agree a short-term lockdown to quell the world's fastest surge in infections.