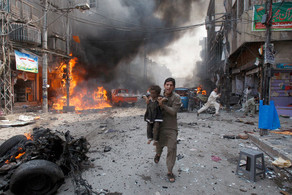 Two people were killed, 18 injured in the northwestern Pakistani city of Peshawar on Wednesday when a bomb exploded near a hospital, Report informs citing the RIA Novosti.

Police sources said the bomb went off near the Hayatabad Medical Complex in a wealthy neighbourhood of Peshawar. According to police, a suicide bomber on a motorcycle hit government car after which the explosion occurred.

Pakistan's main opposition leader Imran Khan was due to visit the hospital, but he was unharmed in the explosion, the two TV channels reported.

None of the groups operating in the region have yet claimed responsibility for the incident.