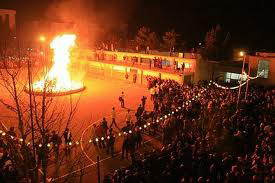 At least one man was killed and 2600 people got injured in the various incidents during the Iran's Festival of Fire on March 15, Pir Hossein Kolivand, head of the country’s Emergency Medical Services (EMS), said, Mehr new agency reported.

The last Wednesday of the Iranian calendar year is called "Chahar Shanbe Suri," (Festival of Fire). It is also known as one of the most dangerous days of the year. Iranians traditionally jump over fires and use small explosives during celebrations.

A 12 year-old boy in capital city of Tehran was killed due to the explosion of hand-made explosives.

At least 600 people of the total 2600 injured people were hospitalized, Kolivand said.