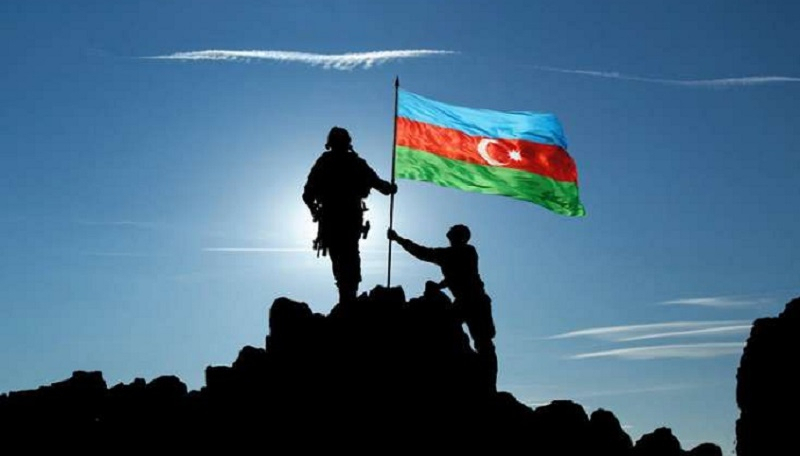 Today marks the next anniversary of the April battles that ended up the glorious victory of the Azerbaijani Army over Armenia.

Armenians had intensively violated ceasefire since mid-March 2016. Starting from the night of April 2, all frontline positions of the Azerbaijani Army and settlements came under intensive enemy shelling. As a result, Armenia resorted to military provocations on troops' contact lines from April 2 to April 5. The civilian population was also attacked during the provocations. Azerbaijani servicemen were martyred as a result of the Armenian provocations, and there were civilians among those dead and injured.

The Azerbaijani Army responded with retaliatory fire on the Armenian positions during the battles; over 2000 hectares of lands were liberated by a prompt counter-attack, and more areas were taken under control from an operational viewpoint. In order to defend Horadiz city from the enemy, "Lele Tepe" height of strategic importance in the direction of Fuzuli district was taken under control by the Azerbaijani Armed Forces. As many as 320 Armenian servicemen were killed in the clashes, over 500 were injured.

On April 19, 2016, a group of Azerbaijani servicemen was awarded high honorary titles, orders, and medals under relevant orders of the President of the Republic of Azerbaijan, for remarkable heroism and bravery while protecting the territorial integrity of Azerbaijan, preventing the armed provocations of Armenian occupants, committed on the contact line of the troops from April 2 to April 5, 2016, as well as the enemy's attacks on the civilians.

In the April battles, the Azerbaijani Army showed its strength to the enemy. As a result, on September 27, 2020, the glorious Azerbaijani Army, under Supreme Commander-in-Chief Ilham Aliyev's leadership, launched a counteroffensive operation to liberate the lands occupied by the Armenian armed forces for almost 30 years. During the 44-day fighting, five cities, four settlements, and 286 villages were liberated.

On November 10, the President of Azerbaijan, the Prime Minister of Armenia, and the President of Russia signed an agreement on a complete cessation of hostilities in the conflict zone. According to the statement, Aghdam was peacefully returned to Azerbaijan on November 20, 2020, Kalbajar on November 25, 2020, and Lachin on December 1, 2020. Thus, Azerbaijan's territorial integrity has been ensured, and the Karabakh conflict has been consigned to history.