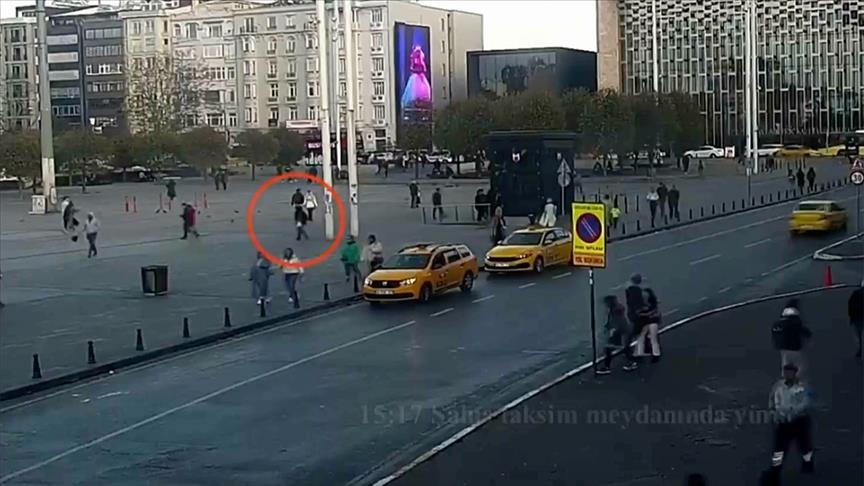 A video was released on Wednesday showing how the terrorist who carried out Sunday’s deadly attack in the heart of Istanbul arrived and left the scene, News.Az reports citing Anadolu Agency.

The Istanbul Police Department released the security camera footage in which the perpetrator of the terrorist attack Ahlam Albashir, a Syrian woman who planted the explosives, can be seen arriving at Taksim Square and leaving right before the blast occurred.

The footage shows that the terrorist, who entered Istiklal Avenue, a busy pedestrian Street, from Taksim Square at 3.17 p.m. local time on the day of the incident, was walking on the street with her backpack and a plastic bag in her hand.

The video includes moments when Albashir, who was sitting on the bench for about 41 minutes, left her backpack on the bench at 4.11 p.m. local time and started walking toward Taksim Square again, and started running after 4.14p.m., the moment the explosion took place.

The moments when the terrorist was walking in front of a hotel at around 4:17 p.m. local time in Taksim Square were also recorded.

Six people, including a 9-year-old child, were killed and dozens injured in Sunday's bombing.

The Turkish government said the attack on crowded Istiklal Avenue was carried out by the PKK/YPG terrorist organization.

Turkish police arrested the perpetrator of the attack while dozens of other suspects were detained.

The police said Albashir has confessed that she was trained by the YPG/PKK terror group as an intelligence operative and entered Türkiye illegally from Afrin, Syria.

In its more than 35-year terror campaign against Türkiye, the PKK – listed as a terrorist organization by Türkiye, the US, and the European Union – has been responsible for the deaths of more than 40,000 people, including women, children and infants. The YPG is the terror group’s Syrian offshoot.