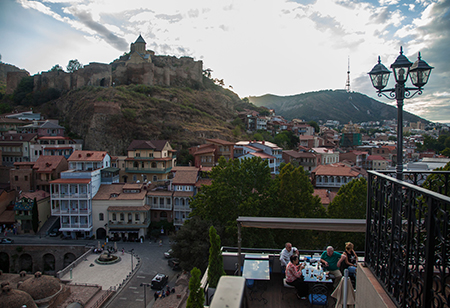 Georgia’s Foreign Ministry says it is not feasible to take in migrants given the current difficulties faced by the country.

This statement came as a response to the comments of Austrian Foreign Minister Sebastian Kurz, who proposed to create refugee centers outside the borders of the European Union and named Georgia as one of these possible locations, according to agenda.ge.

In response, the Georgian Foreign Ministry noted that the redistribution of migrants caught trying to illegally enter the EU has never been raised with Georgia.

"This issue has not been mentioned by Mr. Kurz neither during his Georgia visit [last month] nor elsewhere”, the ministry added.

Kurz made his proposal in an interview with the German newspaper, Bild.

"We need refugee centers outside the EU, which are operated jointly with the United Nations High Commissioner for Refugees”, he said.

Kurz further claimed the location of these camps is not important. Instead, he stressed the importance of "providing protection” for camps outside the EU and "that people who are trying to enter Europe illegally be sent back”.

Such redistribution facilities could be located in Egypt, Georgia or a country in the Western Balkans, Kurz said, adding that the Mediterranean route should be closed for illegal immigrants.

"It is easier to stop and send someone back at the EU’s external borders than when they have already moved into a flat in Vienna or Berlin”, he said.

Georgian Ambassador to Austria Konstantine Zaldastanishvili said earlier this morning that "Kurz [had] mentioned Georgia only incidentally and had nothing particular in mind”.

Zaldastanishvili added that the statement from Kurz was "unexpected and strange” for him as the Austrian Minister was on an official visit to Georgia in February, but never mentioned the idea of migrant camps in the country.