Forest fires continue to rage across Turkey on third day 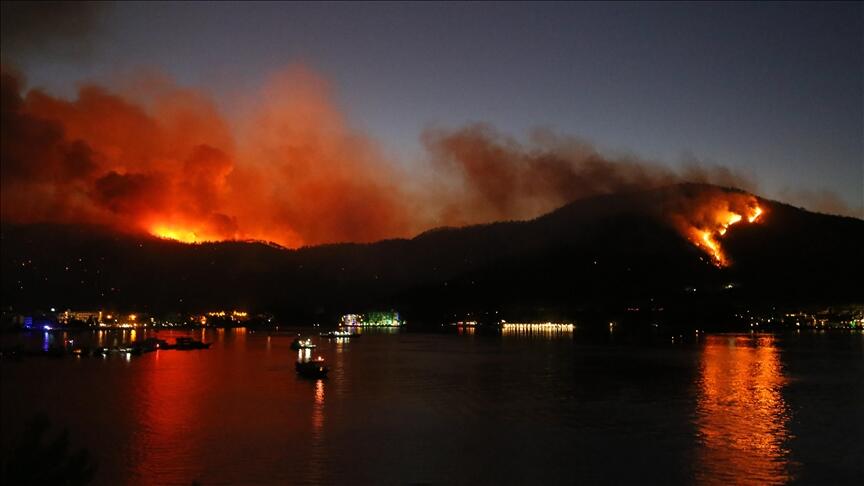 More than a dozen forest fires that started on Wednesday and Thursday are still raging on Friday while dozens of others are “under control,” authorities say, Daily Sabah reported.

Fires erupting one after the other are usual in the “fire” season when temperatures are at their highest but the damage was unprecedented this time, with flames devastating entire villages.

Fires in the southern regions popular among tourists also raised suspicion of arson while authorities are still investigating their causes.

The death toll from the fires rose to four late Thursday when a young man trying to aid firefighters died after being caught in the middle of a fire in Marmaris, a vacation resort town in the southwestern province of Muğla.

The other three whose deaths were reported Thursday were residents of Antalya who were unable to escape from fast-spreading fire in villages.

The wildfire which started in Antalya’s Manavgat on Wednesday was the most devastating. It grew by Thursday with another blaze breaking out in Akseki district neighboring Manavgat further fanning the flames. Strong winds are challenging the extinguishing efforts carried out by firefighters on the ground, planes and helicopters.

More than 60 forest fires were reported in the past two days across the country and 43 among them were brought under control, with cooling efforts underway. Some 4,000 firefighters, three planes, 38 helicopters, hundreds of fire trucks battle the flames.