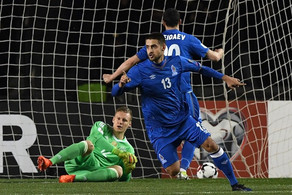 Report informs that 29-year-old forward was the first Azerbaijani player scoring during matches with four-time World Champions and Europe's most successful teams of Italy and Germany.

The player of the German Aue club kicked a goal during a match with Italian team at the Euro 2016 qualifyier in Baku on October 10, 2016. He disappointed German team in the qualifying round of the 2018 World Cup, held in the Republican stadium named after Tofig Bahramov on March 26. However, Nazarov scored equalizer in both games, the Azerbaijani team lost 1:2 and 1:4 respectively.

Notably, Nazarov has kicked 6 goals so far. 4 of them recorded during official matches. In the last cycle, he disappointed Bulgaria and Malta. Other 2 goals were scored in friendly matches.