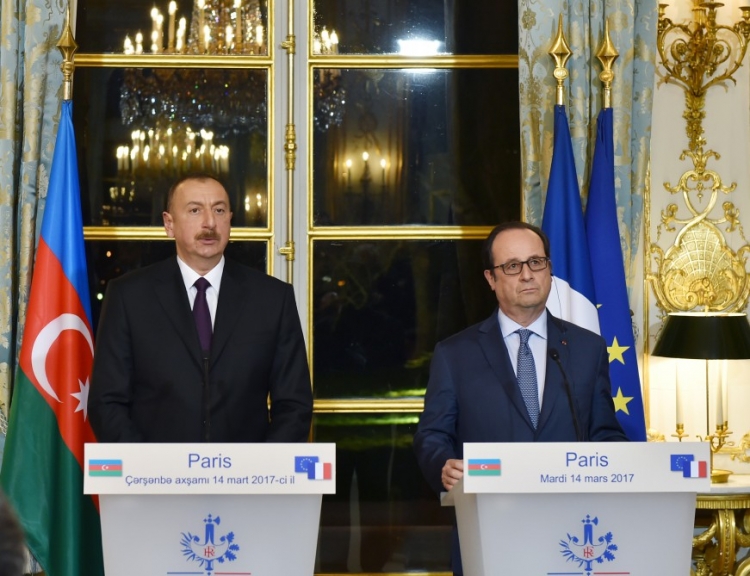 "As a co-chair of the Minsk Group, we want other co-chairs, the United States and Russia to contribute to this process."

“We spoke about the Nagorno Karabakh conflict and noted that the existing status quo is unacceptable. There are risks; we were convinced of this in April last year, when the incident occurred”, French President Francois Hollande said in a press statement on March 14 in Paris following a ceremony of signing documents.

The French President noted the importance of the resumption of the talks: "As a co-chair of the Minsk Group, we want other co-chairs, the United States and Russia to contribute to this process. We believe that the parameters are known, and we can find a way to solve this protracted conflict. We believe that every time our contribution to the establishment of peace lies in the essence of the activity that we want to carry out at the international level and the relations that we want to establish. Especially, when there is tension, and now in the situation between Europe and Turkey. Our role is to clearly state what we accept and what is not. We also have to contribute to the stabilization of relations between Europe and Turkey. As in all other issues, we should encourage dialogue in connection with this topic”.

Francois Hollande noted that good relations have been established between Azerbaijan and France in many areas, in particular in the political sphere: “We know the role of Azerbaijan in the field of negotiating with all partners in the region and beyond. Our only goal is to establish peace. We are looking for peace not only in the region, but also against terrorism, which is a global threat that we have faced”.

Hollande also touched upon the beginning of the talks between Azerbaijan and the European Union: “We want to achieve the set goals. Europe embarked on these negotiations within the framework of the Eastern Partnership, and France supports them from the very beginning”.