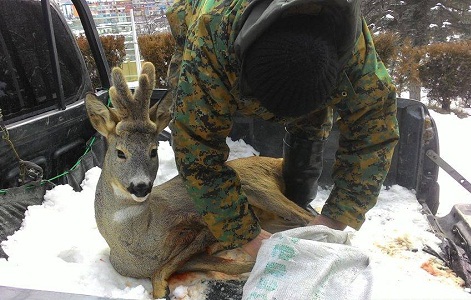 A wounded roe deer rescued by forest rangers on Sunday died despite efforts by veterinarians to nurse its wounds after being shot by poachers at the the Borjomi-Kharagauli National Park in central Georgia.

Rangers on an anti-poaching patrol in Borjomi-Kharagauli National Park heard a gunshot after which they found the roe deer.

"Judging by the trails on the snow, there must have been two offenders”, the agency said, adding the poachers had not yet been identified.

The ministry said the offenders had used a firearm to shoot the roe deer.

The animal was taken to the office of the national park administration where veterinarians offered it a medical aid. The animal died hours after the incident.

Efforts are being made to identify the offenders. Camera traps may be of assistance in this process.

Several years ago camera traps were installed in Georgia’s protected areas and national parks to capture footage and prove that a variety of animals, some rare, live in the country’s uninhabited areas.

Apart from spotting rare animals, photo traps are also a good tool to reduce poaching and identify offenders. If the devices notice movement, such as an animal passing by or illegal hunting, it records the image and sends it to the Administration of Protected Areas.

From 2013 to 2016, 2,160 instances of poaching were reported in Georgia. Of these, 2,140 were qualified as an administrative offence while 20 incidents were treated as a criminal act.

Environment Ministry statistics show that the three most-commonly hunted animals in Georgia are bears, wild goats and the roe deer.