Hikmat Hajiyev: Armenia is a country that supports terrorism at the state level 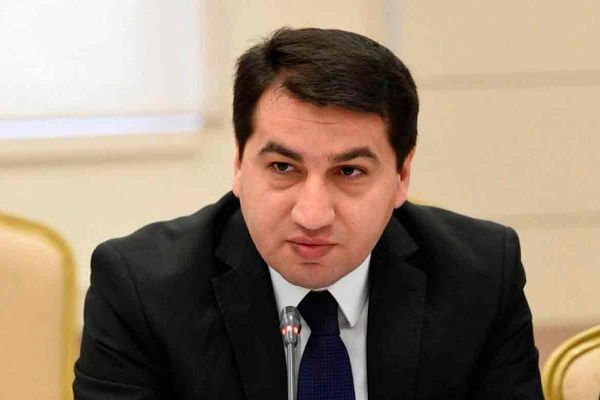 Interview of AzerTag with spokesman for the Foreign Ministry of Azerbaijan Hikmat Hajiyev.

- The UN General Assembly has recently adopted a resolution ‘Combating glorification of Nazism, neo-Nazism and other practices that contribute to fuelling contemporary forms of racism, racial discrimination, xenophobia and related intolerance’. Azerbaijan also supported this resolution. What can you say about it?

- The Azerbaijani people also made great contributions and sacrifices to win the victory over fascism, one of the greatest threats of the twentieth century. More than 600,000 Azerbaijanis were sent to the front, and 300,000 of them were killed in battles. More than 440,000 people wounded in the front line were treated in Azerbaijan used as a rear. A large number of refugees and internally displaced persons from the occupied territories of the USSR, including many Jews  found shelter in Azerbaijan.

Therefore, it is natural that Azerbaijan supported the resolution called ‘Combating glorification of Nazism, neo-Nazism and other practices that contribute to fuelling contemporary forms of racism, racial discrimination, xenophobia and related intolerance’ adopted within the framework of the 72nd session of the UN General Assembly. Even in previous years, Azerbaijan acted as the co-author of the resolution.

This resolution, adopted on the initiative of the Russian Federation, expresses concern over the growing number of dangerous ideologies among people and the activation of extremist political parties, movements and groups and emphasizes the importance of adequate measures to prevent this dangerous process. There is also a requirement that expression of racial superiority or hatred, as well as the dissemination of ideas based on racial discrimination, their funding, and any assistance to racist activities and acts of violence should be punishable by the law.

- Armenia's vote for the resolution is, in fact, the next hypocrisy of this country. Nazi propaganda has become a state policy in this country. Thus, propagandizing SS General Nzhdeh Garegin and Drastamat Kanayan,  nicknamed ‘Dro’, as ‘national heroes’ and perpetuation of their names clearly demonstrates the true essence of the Armenian regime.

Armenia's national ideology based on racial chauvinism formed by Nzhdeh Garegin is today the ideological trend of the ruling Republican Party of Armenia and, ultimately, the Armenian government. The terrible fact is that under the name of ‘Nzhdehizm’ this racist ideology is included in the secondary and high school program in Armenia and the younger generation is educated in this spirit. The head of state Serzh Sargsyan consider Nzhdeh  the ideological leader of his Republican Party. With the financial support of the Armenian government, a book titled ‘Education of Garegin Nzhdeh’ was published and a $7mln film  was produced about this person. The Armenian Embassy in Russia held a presentation of the film and the book in Moscow.

A large monument to Nzhdeh Garegin was inaugurated in the center of Yerevan with the personal participation of Serzh Sargsyan on May 28, 2016.

Despite all these actions, Armenia votes in favor of the adoption of the resolution at the UN General Assembly.

- Beside fascists, Armenia also pursues the policy of canonizing terrorists on the state level. What can you say about it?

- Generally, there is a direct link between the policy of racism, xenophobia, intolerance, extremist ideology and terrorism.

Beginning from the late 1980s, ASALA, an Armenian terrorist organization based on racist ideology, moved its operating zone from the Middle East, Europe and North America to the South Caucasus. Based on the experience of ASALA's terrorist operations and "modus operandi", more than 30 terrorist attacks were committed by Armenian intelligence services in Azerbaijan. Armenia and ASALA launched the first "metro terrorism" in the world by terrorist attacks in the Baku subway.

ASALA and its subordinates - Arabo and Aramo terrorist groups have been directly involved in the aggression of Armenia against Azerbaijan, bloody ethnic cleansing in our occupied territories, including the Khojaly genocide.

ASALA's co-founder Monte Melkonian is Armenia's national hero and has a monument and a street named after him in Armenia’s capital, Yerevan. Monte Melkonian's terrorist "heroism" is included in secondary school textbooks in Armenia.

ASALA terrorist Varujan Garabedian, who committed terrorist attack in Orly airport in France in 1983, was released in 2000, mysteriously welcomed and rewarded as a hero in Armenia. Varujan Garabedian is currently one of the criminal supporters of Armenia's military dictatorship. Such cases are primarily touching the feelings of innocent families, victims of that terrorist act.

In a rhetorical and comparative way, it is the same as the person who committed the Bataklan terror in Paris is released from prison, and later canonized by ISIS.

It all gives a ground to say that Armenia is a country that supports terrorism at the state level.

Azerbaijan always supports a determined struggle against all the forms and manifestations of terrorism, extremism, xenophobia, aggressive separatism and racial discrimination away from double standards.