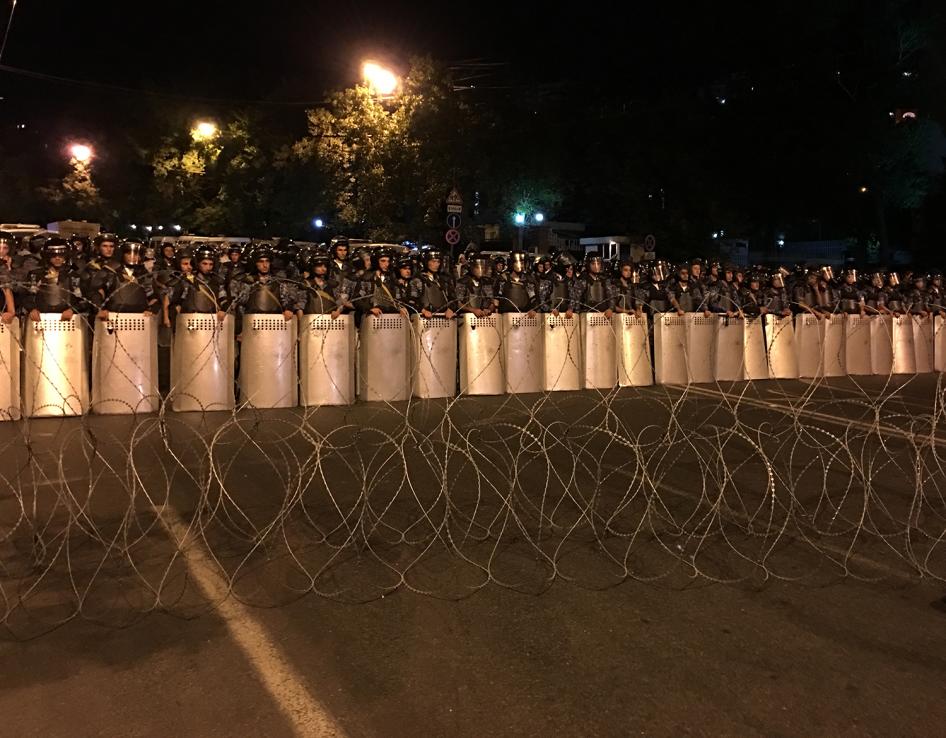 Human Rights Watch (HRW) has posted a new report on the police violence in Armenia.

According to it, the Armenian government has failed to ensure full accountability for police violence against largely peaceful protesters and journalists a year ago. At the same time the authorities have indicted at least 32 protesters, convicting 21 of them, with 11 sentenced to prison.

"On several nights in July 2016, largely peaceful, anti-government protests took place in the Armenian capital, Yerevan. At some protests, the authorities used excessive force, assaulting many demonstrators as well as journalists reporting on the events. Authorities arbitrarily detained many protest leaders and hundreds of participants, pressing unjustified criminal charges against some. No officials have been prosecuted," the report reads.

“A year after Yerevan’s July protests, victims of police violence are still waiting for justice and accountability,” said Giorgi Gogia, South Caucasus director at Human Rights Watch. “The public’s trust in police and the justice system is severely shaken, and an effective accountability process is essential for restoring it.”

According to the report, the protests erupted after armed men from a radical opposition group, Founding Parliament, violently seized a Yerevan police station on July 17, 2016. They are alleged to have killed three policemen and taken hostages. Before the gunmen surrendered on July 31, public support for them and disaffection with the government grew into a protest movement, with almost nightly demonstrations in the capital.

The police response was heavy-handed at times. At a July 29 protest in the neighborhood of the seized police station, police fired stun grenades into peaceful crowds, causing first- and second-degree burns and fragmentation wounds on some demonstrators and journalists. Police did not give proper warning or attempt to use other less violent means to disperse the crowd. Police, and unidentified people in civilian clothes acting with them, attacked protesters and some journalists, punching, kicking, and beating them with wooden clubs and iron bars.

Police arbitrarily detained hundreds of protesters between July 17 and 31, and beat many detainees, in some cases severely. Police did not allow some detainees to get prompt medical care for their injuries. Police held some people for up to 12 hours without documenting the detentions, including holding more than 100 people overnight in a gymnasium. Authorities denied many detainees’ basic rights, including prompt access to a lawyer of their choosing and the opportunity to inform a relative of their detention and whereabouts.

The authorities promptly opened an investigation into the police misconduct, but the investigation has led to limited accountability, Human Rights Watch said. No criminal charges have been brought against any law enforcement officials.

Some police have faced disciplinary actions that included dismissals. In early August 2016, authorities fired the Yerevan police chief for “failing to prevent violent attacks on protesters and journalists,” and suspended or reprimanded at least 17 other officials. Following internal inquiries police also sent several cases to the Special Investigation Service, the government agency responsible for investigating crimes committed by law enforcement.

"In December 2016, President Serzh Sargsyan awarded the Yerevan deputy police chief, who participated in police operations against protesters on July 29, a medal for “excellent maintenance of public order", the report says.