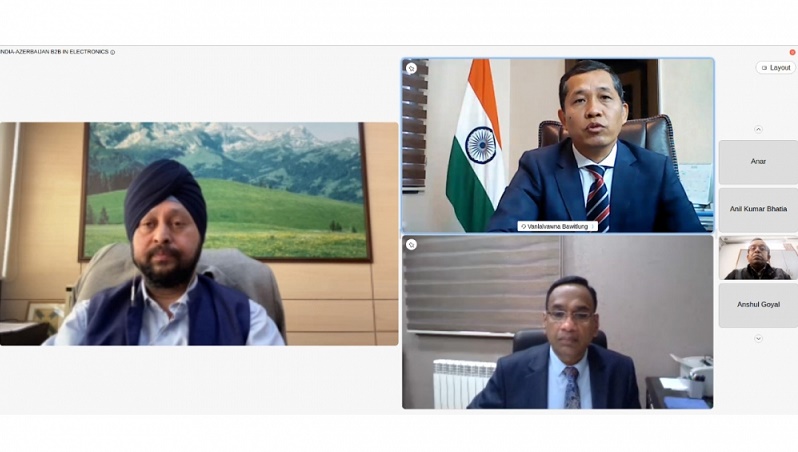 The Embassy of India in Baku, in association with the Electronics and Computer Software Export Promotion Council (ESC) of India, has organized a webinar followed by B2B interactions on electronics and computer software products.

The event which was part of the celebrations of 75 years of India's Independence - Azadi Ka Amrit Mahotsav, was attended by more than 35 representatives of the major companies of various electronics and computer software products in India and Azerbaijan.

The event was aimed at informing the participants about the opportunities offered by the Indian electronics and computer hardware/software sector. In his opening speech, Executive Director of Electronics and Computer Software Export Promotion Council Gurmeet Singh touched upon the strength of the Indian electronics and computer products industry and gave information about the Indian Government’s schemes in this field. He also invited Azerbaijani companies to participate in the upcoming events in India, for which hospitality including return airfare, hotel and food will be provided by the ESC.

Speaking at the webinar, Ambassador of India to Azerbaijan Bawitlung Vanlalvawna noted that there is a huge scope for diversifying India's economic engagement with Azerbaijan. He said that Indian electronic and software products are already known in the Azerbaijani market as varieties of products including mobile phones, devices, and equipment of automatic regulation and control, office equipment etc. are sourced from India. He further stated that India exported electronic and software/hardware products worth over US$ 156 billion annually and there is much scope for enhancing engagement and collaboration between the two countries in this sector.