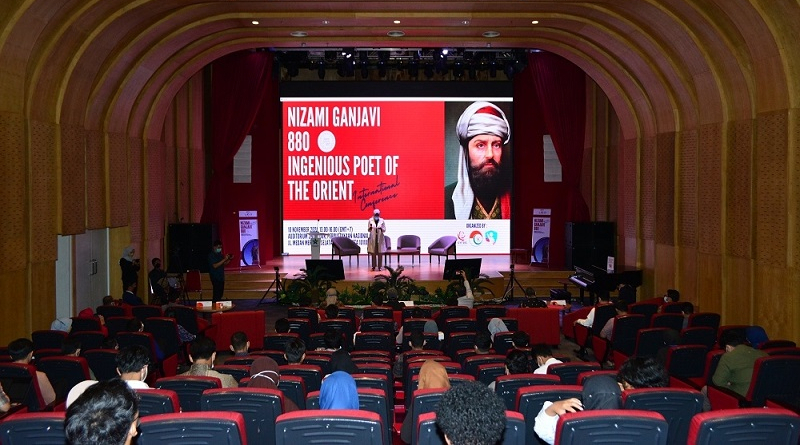 A seminar to mark the 880th anniversary of the great Azerbaijani poet and thinker Nizami Ganjavi has been held in Indonesian, Jakarta.

The event was organized by the National Youth Council of Indonesia, OIC Youth Organization of Indonesia in partnership with the Islamic Cooperation Youth Forum – Eurasian Regional Center (ICYF-ERC).

The opening ceremony, which was held in a hybrid format, was attended by Azerbaijani Ambassador to Indonesia Jalal Mirzayev, Acting Director General of the ICYF-ERC Vusal Gurbanov, President of the OIC Youth Organization of Indonesia Astrid Nadya Rizqita, Vice-President of the OIC Youth Forum and Chairman of the Indonesian Youth Forum Tantan Taufig Lubis, Chairman of the National Library of Indonesia Mohammed Syarif Bando, Vice-Governor of Jakarta Ahmad Riza Patria, as well as the representative of the Ministry of Youth and Sports of Indonesia, Asrorun Niam Sholeh. They welcomed the participants and wished them a successful implementation of the event. The speakers emphasized that such seminars play an important role in the development of cultural relations between Indonesia and Azerbaijan.

Deputy Dean of the Faculty of Oriental Studies of Baku State University Shahin Yusifli, Indonesia’s ambassador to Azerbaijan in 2016-2020, current Chairman of Fananie Center Husnan Bey Fananie, Head of the Department of "Arabic Literature" of the University of Indonesia Bastian Zuleno and Chairman of the Islamic Documentation Center Hadi Nur Ramadan spoke at the plenary discussions. They noted the significance of Nizami's poetry and his role in spreading humanistic ideas.

The seminar was attended by about one hundred students, scientists, experts, as well as prominent public and political figures of Indonesia. The seminar is the fourth international event organized by the ICYF-ERC to mark the 880th anniversary of Nizami Ganjavi.