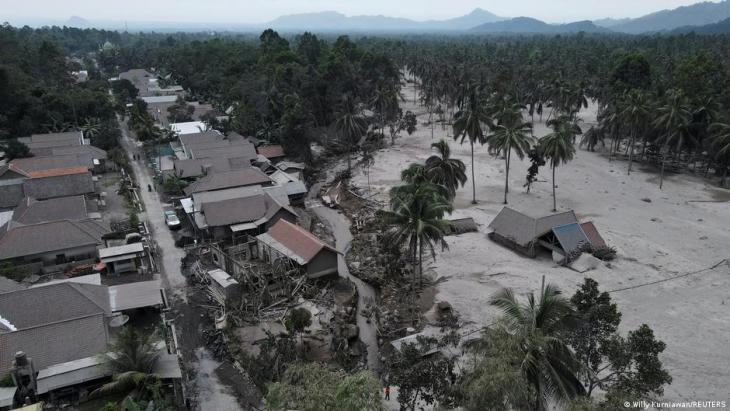 The death toll from the eruption of Indonesia's Mount Semeru volcano rose to 34 on Tuesday, the national disaster agency said, as aid was rushed to the affected region, News.Az reports citing AFP.

The biggest mountain on the island of Java on Saturday ejected a mushroom of volcanic ash high into the sky and rained hot mud as thousands of panicked people fled their homes.

"The latest update from the ground... (is) 34 people died, 17 are missing," the disaster agency spokesman Abdul Muhari told AFP.

Almost 3,700 have been evacuated from the affected area, he added.

Rescuers have been battling dangerous conditions since the deadly weekend eruption, searching for survivors and bodies in the volcanic debris, wrecked buildings and destroyed vehicles.

Search crews deployed dogs on Tuesday to aid the operation.

There were three small eruptions on Tuesday, each spewing ash around a kilometre (3,300 ft) into the sky, authorities said.

Officials have advised locals not to travel within five kilometres (3.1 miles) of Semeru's crater, as the nearby air is highly polluted and could affect vulnerable groups.

Indonesia sits on the Pacific Ring of Fire, where the meeting of continental plates causes high volcanic and seismic activity, and the country has nearly 130 active volcanoes.