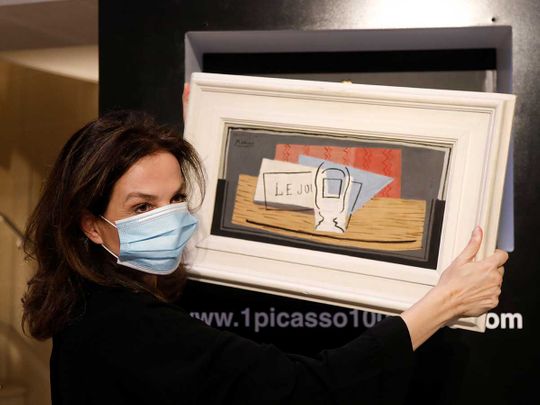 An Italian woman on Wednesday won a Pablo Picasso painting worth 1 million euros ($1.1 million) in a French charity raffle that raised money for African water projects.

The winner - who received her lottery ticket as a gift - will acquire the Spanish master’s 1921 oil-on-canvas still life “Nature morte”, a small abstract representing a table, newspapers, and a glass of absinthe.

The raffle raised 5.1 million euros, of which 900,000 euros will go to Monaco billionaire collector David Nahmad who provided the painting. The rest will be used by charity CARE for clean-water projects in schools and villages in Cameroon, Madagascar, and Morocco. Nahmad also gave 100,000 euros to CARE.

At the first edition of this raffle in 2013, a 25-year-old American won a Picasso drawing titled “The Man in the Opera Hat”. It raised 4.8 million euros for an association working to preserve the ancient city of Tyre, in modern-day Lebanon.

After a six-year gap between the first two Picasso raffles, the organizers hope to run an annual edition of the event, to the benefit of a different organization each year.

The highest price ever fetched by a Picasso artwork was reached in May 2015, when Christie’s sold his 1955 “Les femmes d’Alger” for $179.4 million.