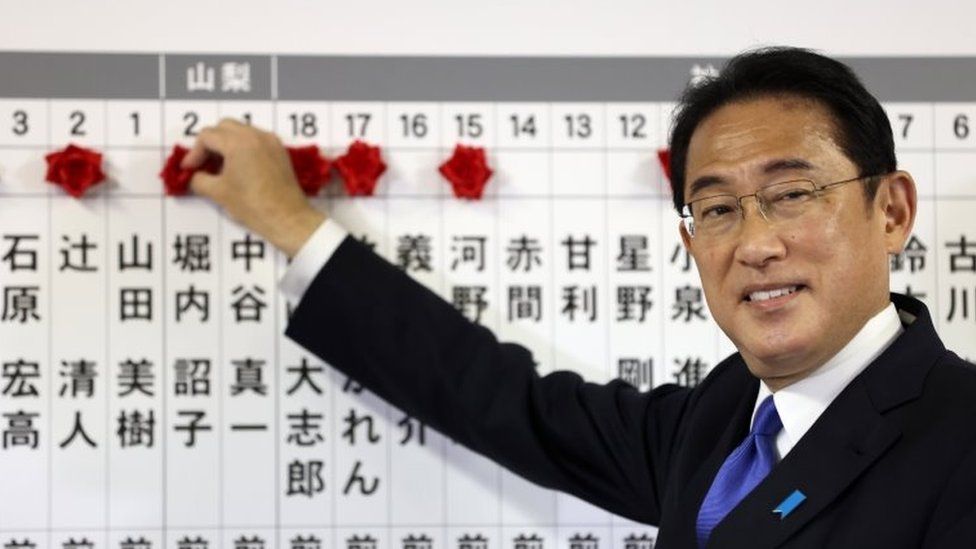 In a big win for Mr Kishida, who only became PM a month ago, his party secured more than 233 lower house seats - enough to govern without its coalition partner Komeito.

The LDP has dominated Japanese politics for decades but was criticised for its handling of the pandemic.

The resignation came amid plummeting poll ratings for the LDP following an unpopular push to continue with the Tokyo Olympics despite public concern about surging Covid-19 rates.

Mr Kishida, 64, has long-targeted the prime ministerial role and previously served as the country's foreign minister from 2012 to 2017.

The LDP went into Sunday's general election holding 276 of the 465 seats up for grabs.

Initial exit polls suggested the LDP would need to rely on its coalition partner for a majority - but it defied expectations.

The LDP has now scored 261 seats, exceeding the parliamentary majority of 233 seats. With Komeito scoring 32 seats, it gives their coalition a total of 293 seats.

Japan's parliament, known as the National Diet, comprises the lower House of Representatives and an upper House of Councillors.

Before the election Mr Kishida had promised to spend trillions of yen to help support the world's third largest economy in the wake of the pandemic.

He had on Sunday night told national broadcaster NHK that he planned an extra budget before the end of this year.