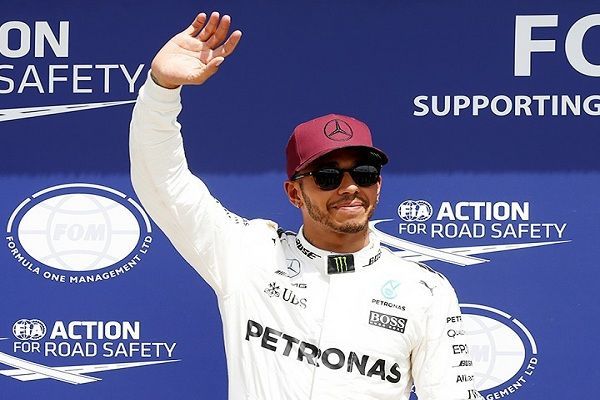 It was a joyous day for race winner Lewis Hamilton and for hometown favourite Lance Stroll at the Canadian Grand Prix on Sunday.

Hamilton, coming off a disappointing performance two weeks ago in Monaco, cruised to his third Canadian GP victory in a row for Mercedes AMG and his sixth overall, while Canadian rookie Stroll finished ninth in his Williams to earn his first Formula One points, according to CBC.

The 18-year-old Stroll, on the grid for the first time before his home fans, finished for only the third time in seven races this season and achieved his goal of earning his first points at Circuit Gilles Villeneuve, where he watched the race with family as a child. Ninth place gave him two points, placing him 16th among 21 drivers.

"It's just special to see everyone, friends and family," said Stroll, who was on his own after teammate Felipe Massa crashed on the first lap. "We're all in it together, bad days and good days.

"When everyone is there and everyone is happy it feels good, especially at home. I can't think of a better place to do it."

A first-lap mishap that damaged the two Ferraris made it an easy day for the Mercedes AMG team, with Hamilton taking the chequered flag and teammate Valterri Bottas safely in second place.

Then he and Bottas thrashed Ferrari, turning the tables on their rivals who finished one-two in Monaco. It was the first time Hamilton and Bottas took the top two spots since the Finn joined Mercedes AMG this season.

Hamilton raved about the work of the team's bosses and engineers, who have made it a two-team battle again after Ferrari looked ready to take control of the F1 championship.

"They did such a great job of analysing what went wrong, all the points," he said. "It was amazing teamwork.

Sebastian Vettel fell from second to fourth off the start as Bottas passed him on the inside and then his Ferrari was clipped by Max Verstappen. The German was forced to the pits with a damaged front wing. On lap 11, Verstappen's Red Bull died at the side of the track, ending his day and leaving Hamilton and Bottas alone in front.

"I tried to be aggressive and get ahead of the Ferraris," said Bottas. "I had a bit of a lock-up but I knew there was an opportunity and I dived in."

Ferrari reported that Kimi Raikkonen, who finished seventh, had balance problems after going on to the grass during the first-lap mess.

Drivers also had to deal with 29C heat and a strong wind.

"The wind was throwing the car around quite a lot and that was tricky," said Daniel Ricciardo, who has finished third in three straight races. "Then with a few laps to go I heard Seb [Vettel] was coming.

"I couldn't rest the whole race. It tested the concentration, but I'm very happy."

Perhaps not as much as Hamilton, whose 56th career win came on the track where he got his first in 2007.

"It's always been a special place for me," said Hamilton. "It's crazy to think after 10 years that I enjoy racing every lap just as I did 10 years ago."

Or Stroll, who may have quieted some critics who feel he made the jump to F1 too young.

"You can never let yourself get discouraged," he said. "Everything was positive today."