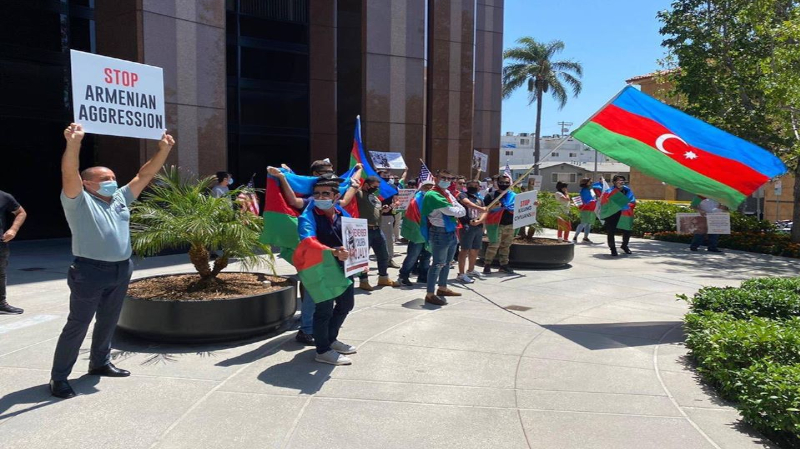 On July 21, 2020 hundreds of Armenian Dashnak radicals brutally attacked a handful of Azerbaijani-Americans near Azerbaijan’s Consulate General in Los Angeles, resulting in many injuries and hospitalizations.

The Los Angeles Police Department (LAPD) is currently investigating this violence against Azerbaijani-Americans as a hate crime, the Consulate General of Azerbaijan in Los Angeles told News.Az.

In order to divert the attention away from this hate crime, since yesterday the main organizers of the protest action – the Armenian National Committee of America and the Armenian Youth Federation – have been claiming on social media that “Azerbaijanis came to the protest action armed with various weapons”. They also claim that the “counter-protesters had the weapons from the very start. The police were informed. They confiscated the weapons, but handed them back to protesters while the protest was ongoing. "Thus, in their despicable attempt to protect the thugs, who committed violence targeting Azerbaijani-American community, and avoid responsibility, the Armenian special interests try to blame the victims of this violence and hate crime.

As a result of the immediate and meticulous investigation by the Consulate General of Azerbaijan and the Azerbaijani-American community, it has become clear that the alleged “weapons” (a saw, a hammer, plies etc.) were actually brought in by an Armenian Dashnak radical who was driving his car around the Azerbaijani demonstrators repeatedly, throwing those tools out towards them, in a clear attempt to cause a provocation. The Consulate General made the video of this provocation public showing the said individual’s actions and his car:

The Consulate General also reported this information, including the car’s license plate number, to the LAPD.

Azerbaijan’s Consul General Nasimi Aghayev also sent an inquiry to the LAPD asking them to comment on the allegations against Azerbaijani-American counter-protestors. In his response, Captain Randy Goddard, the Commanding Officer of LAPD, who was leading the police force at the July 21 protest action in front of the Consulate General, said:

I am also very disappointed that [they] would allege LAPD “confiscated weapons but handed them back to protesters while the protest was ongoing. " This is also NOT true.”

Thus another propaganda lie by Armenian special interests has been revealed.

No matter how hard they try, they cannot change the simple truth: Armenian Dashnak thugs violently attacked Azerbaijani-American community out of sheer hatred and committed a serious hate crime. Truth will always prevail!