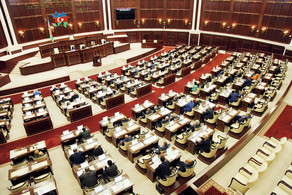 It doesn't refer to the gifts, presented as a symbol of hospitality.

Report informs that it is stipulated in the newly developed draft law "On ethical conduct rules of deputies of the Milli Majlis of the Republic of Azerbaijan".

The draft states that it doesn't refer to the gifts, presented as a symbol of hospitality and with cost not higher than the amount mentioned in the law "On fight against corruption" (55 AZN).

If an MP cannot determine whether to accept gift or if it was given as a symbol of hospitality, then opinion of the parliament's Disciplinary Commission shall be got and complied with.