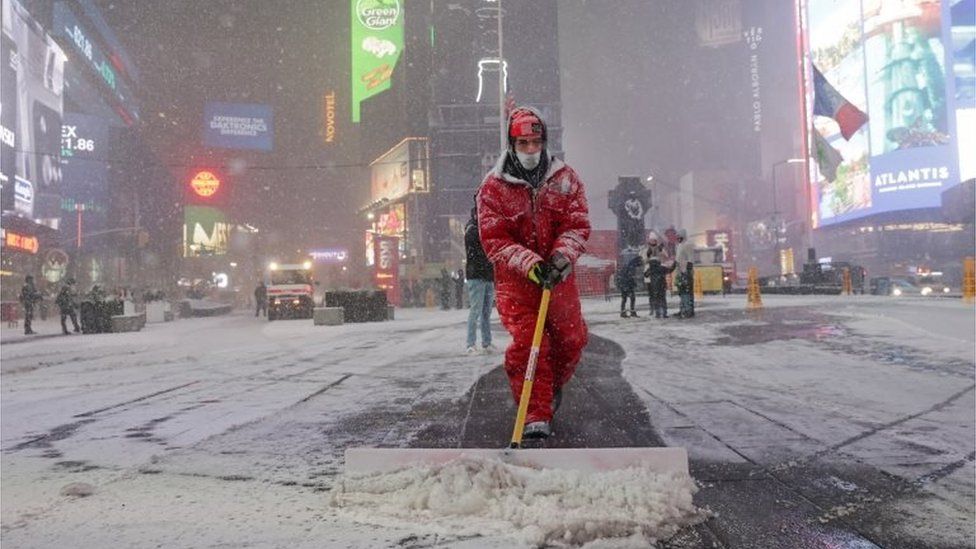 Millions of people in the Southeast United States prepared for a snowstorm and freezing rain on Sunday, feared to knock out power, News.Az reports citing Daily Sabah.

The "strong storm over the Southeast/Southern Appalachians will move northeastward inland from the coast to Southeastern Canada by Tuesday," the National Weather Service (NWS) said on its website.

"The system will produce rain, thunderstorms, snow and rain/freezing rain from the Lower Mississippi Valley to the Southeast/southern Mid-Atlantic, Sunday," with more damage predicted for Monday, it continued.

Drivers were warned of "hazardous road conditions" and major travel headaches from Arkansas all the way up to the northeastern state of Maine.

Tens of thousands of customers were without power in Georgia, North Carolina, South Carolina and Florida. More than an inch of snow fell per hour in some parts of the Carolinas, Georgia, Tennessee and Virginia, according to the National Weather Service Storm Prediction Center.

The storm was making air travel extremely difficult in some parts of the South. The nation’s hardest-hit airport -- Charlotte Douglas International -- remained open around dawn Sunday, the airport said in a weather briefing. But more than 1,000 Sunday flights in Charlotte have been cancelled – more than 80% of the airport’s Sunday schedule, according to the flight tracking service flightaware.com. Charlotte is a major hub in the South for American Airlines.

About 200,000 customers had already lost power in the southeast, including over 100,000 in Georgia alone, according to the website PowerOutage.us.

Governor Brian Kemp had declared a state of emergency on Friday, and snowplows were at work before noon to clear the roads.

Virginia and North Carolina have also declared a state of emergency. The Weather Channel reported that more than a foot of snow had fallen in North Carolina Sunday morning.

Florida was indirectly affected when several tornadoes caused by the winter storm damaged property in the southern state, according to the Weather Channel.

The storm is also predicted to cause some coastal flooding, with the NWS warning that winds could near hurricane force on the Atlantic coast.

The northeastern United States had already seen snow chaos in early January when a storm blanketed the Northeast.

After that storm, hundreds of motorists were stuck for more than 24 hours on a major highway linking to the capital Washington.