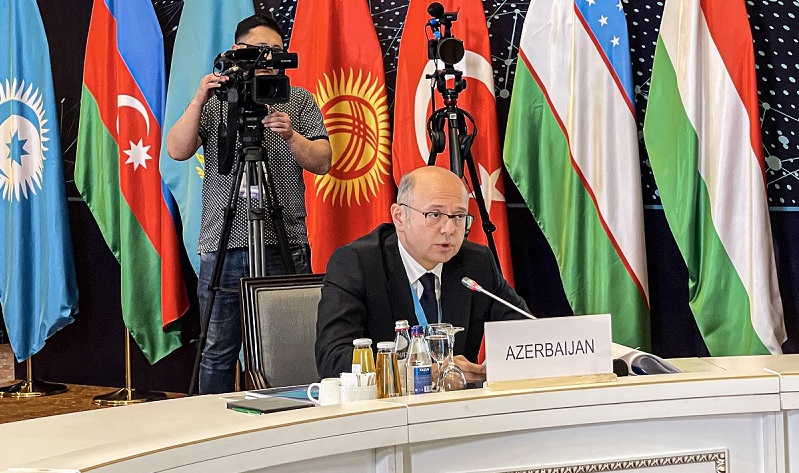 In his speech, the minister assessed OTS as an effective cooperation platform with increasing strategic importance in modern geopolitical and energy security realities. He noted that the recent intensifying mutual visits of the leaders of the Turkic States, the decisions of the two countries that ensure the deepening of relations and Alliance, serve to strengthen the Turkish unity. In particular, the strategic initiatives of the President of Azerbaijan Ilham Aliyev and our victory in the Patriotic War created opportunities for the geographical unity of the Turkic world through the Zangazur corridor after many years.

It was noted that the trade turnover of Azerbaijan with OTS members exceeded 4.6 billion USD. The investments of these countries in our economy amounted to 13.8 billion USD, while Azerbaijan's investments in member states - 21.3 billion USD.

It was stated that since the first Meeting of the Energy Ministers of OTS, Azerbaijan contributed to energy cooperation between the Turkic States through the signing of the Shusha declaration with Türkiye, the start of natural gas exchange with Turkmenistan, cooperation on the Dostlug field, the signing of a road map covering 30 directions with Uzbekistan, plans to expand energy partnership with Kazakhstan.  It was noted that the transportation of electricity through Türkiye via the Zangazur corridor and the Black Sea submarine power line, which Hungary will also connect, will ensure the energy community of the Turkic States, as well as integration with Europe. In particular, the prospects of the Baku-Tbilisi-Ceyhan pipeline and the Southern Gas Corridor were brought to attention. "The role of TANAP and TAP in the diversified and sustainable energy supply made it necessary to renew the EU's strategic energy partnership with Azerbaijan and reaching exports to Europe to 20 bcm by 2027. The expansion of the Southern Gas Corridor will not only strengthen the positions of Azerbaijan and Türkiye in ensuring energy security in a wide geographic area, but will also allow the fraternal countries to enter new markets.”

It was noted that since last year, Türkiye and TANAP and TAP have been supplied with 9.6 bcm of natural gas, and Europe-more than 16 bcm.  The importance of the participation of Turkic states in the transformation of the Karabakh region into the green energy zone, active cooperation in the fields of renewable energy and energy efficiency was also emphasized. It was noted that these new steps of Azerbaijan in energy with the Turkic States and the modern energy course will contribute to the realization of energy - related goals in the document “Turkish World Vision-2040”.

It should be noted that Azerbaijan, Kazakhstan, Kyrgyzstan and Türkiye are founding member states of the Organization of Turkic States, and Turkmenistan and Hungary are observer members.