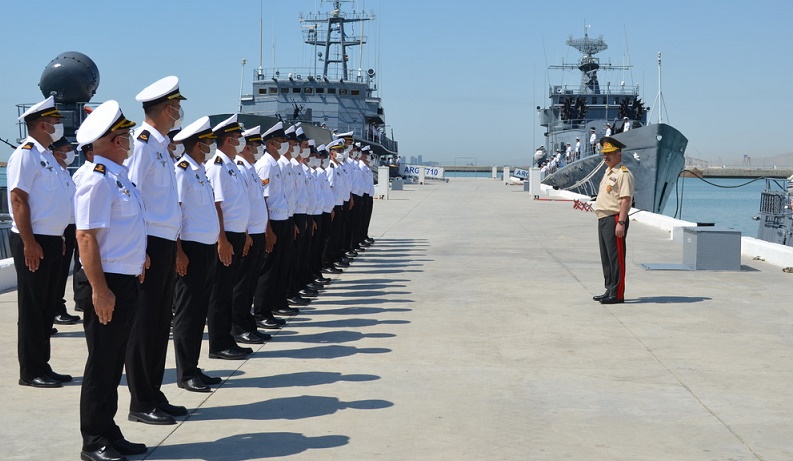 The Minister of Defense, Colonel General Zakir Hasanov visited the Naval Forces to inspect the readiness of the team to participate in the “Sea Cup” contest, which will be held as part of the International Army Games-2021.

First, flowers were laid at the monument to the national leader Heydar Aliyev erected on the territory of the military unit and his memory was honored.

The Minister of Defense inspected the supply and equipment of the crews participating in the contest, as well as the level of readiness of ships and the military personnel representing the country.

It was reported that 66 Azerbaijani seamen on G-122 and G-124 patrol ships are planned to participate in the contest to be held from August 22 in Enzeli, the Islamic Republic of Iran.

The Minister wished success to the seamen who had always achieved high results in the contest and gave them relevant instructions to worthily represent the country.

Then, the overhauled G-121 patrol ship was presented to the Minister of Defense. It was noted that the ship is capable of successfully carrying out tasks to destroy enemy targets at sea, ensure the safety of oil and gas pipelines and protect energy infrastructure from sabotage groups.

When inspecting the G-121 patrol ship, the Minister highly appreciated the work done and gave relevant instructions to further improvement of the professionalism of servicemen.

In the end, a video reflecting the activities of the Naval Forces was shown.