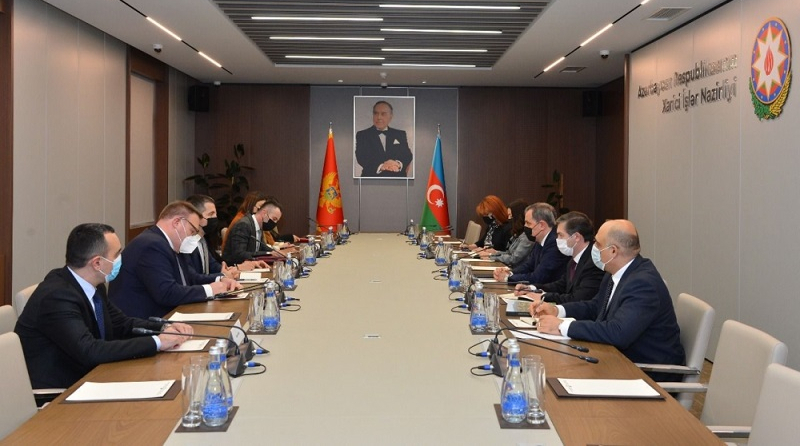 Azerbaijan's Foreign Minister Jeyhun Bayramov has met with a delegation led by President of the Parliament of Montenegro Aleksa Bečić, the Foreign Ministry told News.Az.

Minister Bayramov said that Azerbaijan attaches importance to the development of relations with Montenegro. He hailed the high-level political dialogue between the two countries and the development of relations at the level of strategic partnership. The Minister noted that the current visit of the President of the Parliament and the meetings and discussions held within this framework will have a positive impact on the further enhancement of bilateral relations.

Bečić thanked for the warm welcome and hospitality. He referred with satisfaction to the meetings held with the President of the Republic of Azerbaijan, the Speaker of the Milli Majlis, as well as the Prime Minister during the visit. The activities of the diplomatic missions of both countries in the development of relations were especially emphasized. Aleksa Bečić thanked Azerbaijan for its humanitarian assistance in the fight against the pandemic.

The sides exchanged views on the prospects of cooperation between the two countries in economic, investment, transport, energy, humanitarian, as well as tourism spheres. It was noted that the two countries should continue consultations in the political sphere, as well as in the consular field. They also stressed the importance of the activities of the joint intergovernmental commission in terms of expanding economic and trade relations.

Minister Bayramov provided an insight into the current situation in the region, in particular about the results of the 44-day war that put an end to the occupation, which lasted about 30 years, about the reconstruction work carried out in the liberated territories, about the urgent measures taken by the government to ensure in the shortest possible time the dignified and safe return of large numbers of IDPs, as well as on the activities in the field of demining and on the steps taken in connection with the implementation of trilateral statements.

Aleksa Bečić noted that Montenegro has always supported the sovereignty and territorial integrity of friendly Azerbaijan. He noted that his country believes in the future of peace and dialogue, and wished Azerbaijan success in peace-building activities in the region.

The President of the Parliament of Montenegro invited Minister Bayramov to visit his country.

The minister thanked for the invitation and said that Azerbaijan is ready and committed to further development of bilateral relations.

The sides also discussed other issues of mutual interest.