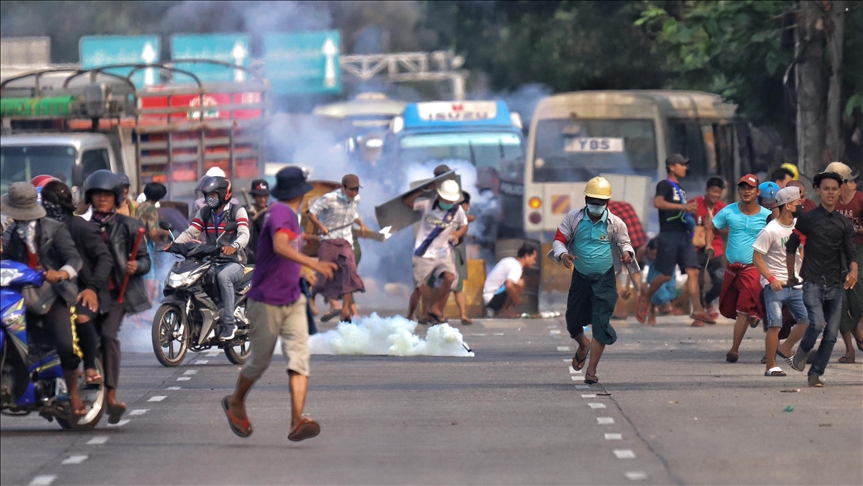 The National Administrative Council, led by the military chief and Feb.1 coup leader Sen. Gen. Min Aung Hlaing, has been escalating the violence to quell the anti-coup demonstration.

It imposed martial law in Hlaing Thar Yar and Shwe Pyi Thar, two industrial cities in the former capital Yangon, on Sunday, following the violence in which almost 40 people were killed and several others injured. Sunday’s violence has brought the total death tolls to more than 110 since the Feb. 1 military coup.

The junta on Monday placed four more townships, all are industrial cities in Yangon’s eastern part, under martial law.

The move came hours after the Chinese Embassy in Yangon demanded the security and safety of Chinese investments in the country after the junta accused the protesters of setting seven factories on fire, most are Chinese-operated garment factories and a school in Hlaing Thar Yar and Shwe Pyi Thar, on Sunday.

The Chinese Embassy in a statement issued late Sunday urged Myanmar authorities to take effective measures to stop violence and punish the perpetrators.

All six townships of Yangon placed under martial law are home to industrial workers who are already among some of the most impoverished in Myanmar.

New York-based Human Rights Watch (HRW) urged the UN and international community to impose strong actions on the junta for atrocities against the largely peaceful protesters.

“The horrific increase in the number of protesters killed by live fire over the weekend shows just how emboldened Myanmar’s security forces are to target protesters with live ammunition,” said Phil Robertson, deputy director of Human Rights Watch's Asia Division.

“The longer it takes for strong action to come from the international community, the longer Myanmar’s generals will feel they can get away with murder,” he said on Monday.