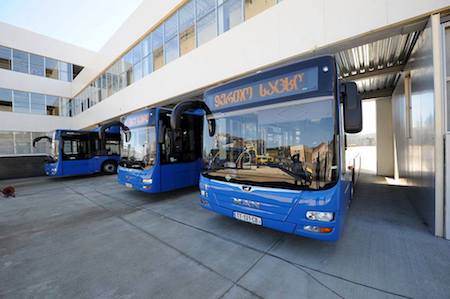 The first blue buses arrived in Georgia on October 6, 2016. All new buses are more environmentally-friendly than the current yellow ones as they run on compressed natural gas (CNG).

Furthermore, new buses are able to accommodate people with wheelchairs and other disabilities.

All the new gas-operated buses are already in Tbilisi and will be added to the fleet step by step.

A new autopark is also being built in Tbilisi to provide parking spots for the buses.

Tbilisi City Hall started the modernisation of the Tbilisi transport fleet last September. The total cost of the project was €34 million where the EBRD invested €27 million and the Eastern Energy Efficiency and Environment Partnership of the EU provided €7 million.

Upgrading Tbilisi’s public bus fleet was one of several projects in the pipeline to improve the sustainability of the country’s transport sector and reduce the effects of vehicle emissions.